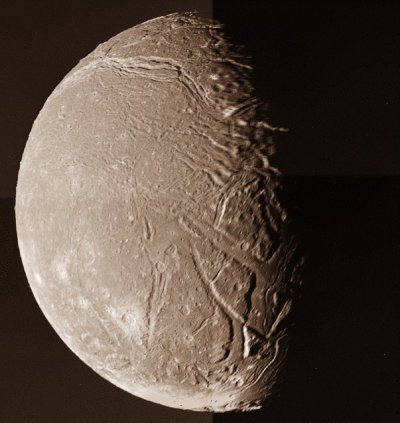 Ariel by Voyager 2 in 1986. The Kachina Chasmata canyon system stretches across the upper part of the image.

Ariel is the fourth largest and the brightest moon of Uranus. Ariel is the 15th moon in order from the planet. It is named after the leading sylph – a creature made of air – in Alexander Pope's poem "Rape of the Lock" (a name shared by the mischievous spirit who serves Prospero in Shakespeare's The Tempest) and is also known as Uranus I. It was discovered on October 24, 1851, at the same time as Umbriel, by William Lassell.

The surface of Ariel is a mixture of heavily-cratered terrain, smooth plains, and systems of interconnected valleys, called chasmata, which are hundreds of kilometers long and more than 10 km deep. Some ridges in the middle of the valleys are probably due to upwellings of ice, while the partial submergence of some craters indicates past flooding, possibly by flows of liquid ammonia, methane, or even carbon monoxide. Although Ariel may have been internally hot and active long ago, perhaps as a result of tidal action, it is cold and geologically dead today.

In 2002, astronomers announced the discovery of dry ice (frozen carbon dioxide) on Ariel from observations made at NASA's Infrared Telescope Facility (IRTF). The discovery marks the first detection of dry ice on a Uranian moon, the surfaces of which are mostly composed of water ice. Carbon dioxide ice has been found on Neptune's largest moon (Triton), the martian polar caps, and two of Jupiter's moons. The dry ice on Ariel appears on the trailing side of the moon. A possible explanation for this is that the dry ice was originally distributed uniformly over the surface but over time was buried or destroyed by the more intense bombardment of meteors on the leading hemisphere. Another process could also be involved. A plasma of protons and electrons surrounds Uranus, circulating at the same rate as the planet spins, with a period of 17 hours. Ariel's orbit around Uranus takes a much longer 60 hours, so the faster-moving plasma overtakes the moon from behind. The dry ice on Ariel's trailing side could be related to the greater plasma irradiation on the trailing side.