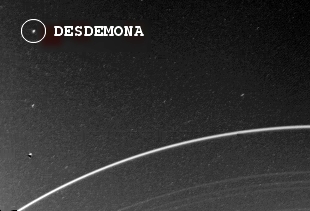 Desdemona imaged beyond the rings of Uranus by Voyager 2.

Desdemona is the fifth moon in order of distance from Uranus. It is named after the wife of Othello in Shakespeare's play Othello and is also known as Uranus X. Desdemona was discovered by the Voyager scientist Stephen P. Synott from images sent back by Voyager 2 on January 13, 1986 and was given the temporary designation S/1986 U6.