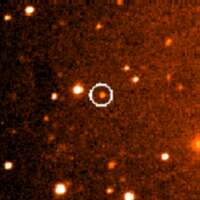 Sycorax is the twenty-third moon of Uranus in order from the planet. It was discovered in 1997, together with Caliban, by Brett Gladman, Phil Nicholson, Joseph Burns, and J. J. Kavelaars using the 5-m Hale Telescope. It is named after Caliban's mother in Shakespeare's play The Tempest and is also known as Uranus XVII. Sycorax is an irregular moon with a highly inclined, retrograde orbit. Like Caliban, it is unusually red in color, suggesting it came originally from the Kuiper Belt.