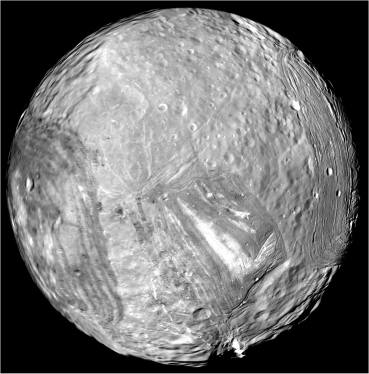 Miranda is the fourteenth moon in order of distance from Uranus. It is named after Prospero's daughter in Shakespeare's play The Tempest and is also known as Uranus V. It was discovered by Gerard Kuiper on 16 February 1948 at McDonald Observatory.

Miranda is one of the most remarkable objects in the Solar System. Its surface reveals huge fault canyons up to 20 km (12 mi) deep, terraced layers, and an extraordinary mixture of young and old terrain seemingly jumbled together. The younger regions may have been produced by incomplete differentiation of the moon, a process in which upwelling of lighter material surfaced in certain areas. This hypothesis is now favored over an earlier and more dramatic one in which it was suggested that Miranda has been shattered, perhaps as many as five times in its history. After each such catastrophe, according to this suggestion, the moon reassembled from the remains of its former self with portions of the core exposed and portions of the surface buried.

A clue to what happened to Miranda in the past is its orbital inclination, which is high for a body so close to its primary. At some time in the past, it may be that Miranda in a 3:1 orbital resonance with Umbriel. Resulting tidal friction may also have caused warming within the moon and thus be the cause of the geological activity.