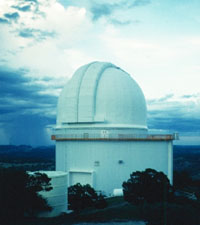 McDonald Observatory is the observatory of the University of Texas, on the adjacent peaks of Mount Locke (altitude 2,070 m) and Mount Fowlkes (2,070 m), near Fort David in western Texas. It operates six telescopes, including the 9.2-m Hobby-Eberly Telescope; the 2.7-m (107-in) Harlan J. Smith Telescope, completed in 1968 with substantial NASA assistance, on Mount Locke; and the 2.1-m Otto Struve Telescope, opened in 1939, on Mount Fowlkes. The Observatory was founded in 1932 and is named after its benefactor William McDonald (1844–1926).

Interesting trivium: the 2.7-m Harlan J. Smith Telescope may be the only major telescope in the world that has been the victim of a handgun assault. One night in February 1970, a McDonald Observatory employee suffered a breakdown and carried a pistol to the observing floor of the 107-in instrument. Having fired a shot at his supervisor, he then unloaded the rest of the clip into the primary mirror. Happily, fused silica is more resilient than ordinary glass so that the big mirror didn't shatter. The small craters were subsequently bored out and painted black, and the end result is simply a slight reduction in the efficiency of the telescope. The incident made the national television news, with Walter Cronkite describing it before a projection showing the wrong telescope upside down!