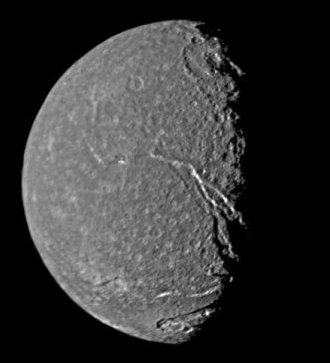 Titania is the largest moon of Uranus and the 17th in order from the planet. Titania was discovered on Jan 11, 1787 by William Herschel. It is named for the Queen of the Faeries in Shakespeares's A Midsummer Night's Dream and is also known as Uranus III.

Titania's surface – a mixture of cratered terrain (including some craters that are partly submerged) and systems of interconnected valleys hundreds of km long but with few impact basins – has clearly been reworked over the past few billion years. According to one theory, Titania was once hot enough to be liquid; the surface cooled and hardened, then the interior froze and expanded, cracking the surface and resulting in the valley systems seen today.