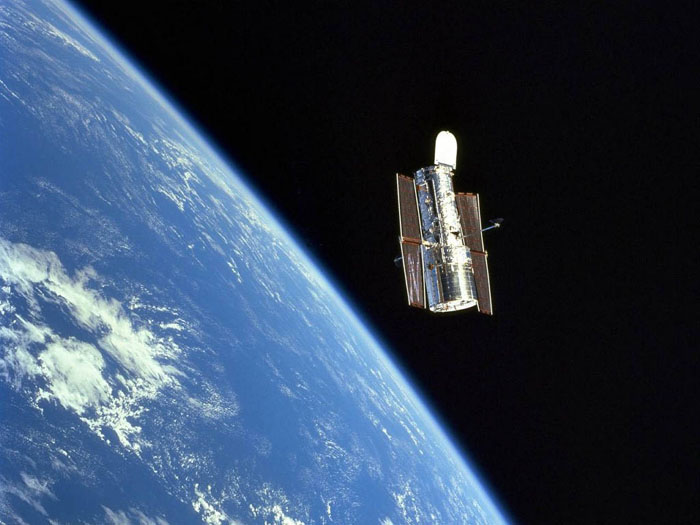 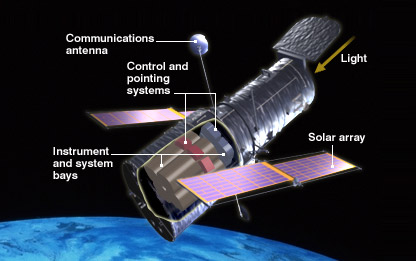 The Hubble Space Telescope is an orbiting observatory, built and operated jointly by NASA and the European Space Agency, which is equipped with a main mirror 2.4 m (94.5 in) in diameter. It is named after American astronomer Edwin Hubble.

The Hubble Space Telescope (HST) is the visible/ultraviolet/near-infrared element of the Great Observatories program. With its high resolution, the HST has revolutionized many aspects of astronomy and cosmology. Science operations are conducted from the Space Telescope Science Institute (STScI) in Baltimore, Maryland.

The idea for a telescope in space was discussed as early as 1923 by the German rocket pioneer Hermann Oberth. In 1969, astrophysicist Lyman Spitzer gathered the support of other astronomers for a 'large orbital telescope'. In 1969, the National Academy of Sciences gave its approval for the Large Space Telescope (LST) project, and hearings and feasibility studies continued. The Hubble Space Telescope was authorized by the U.S. Congress in 1977, and designed and built in the 1970s and 1980s. Deployed on April 25, 1990, from the Space Shuttle Discovery, it orbits approximately 600 km (375 mi) above the Earth's surface.

Hubble is the first and, so far, only telescope to have been serviced in orbit by astronauts. To date there have been four servicing missions. A fourth, and final one, was due to have takne place in May 2009.

Following upgrades and repairs since its launch on April 25, 1990, the main science instruments attached to the telescope are the Wide-Field and Planetary Camera 2 (WFPC-2), the Near Infrared Camera and Multi-Object Spectrometer (NICMOS), the Space Telescope Imaging Spectrograph (STIS), and, installed in 2002, the Advanced Camera for Surveys (ACS). In August 2004, the STIS, which had accounted for 30% of the telescope's observing time, stopped working.

The only way to service, repair, and upgrade Hubble is via the Space Shuttle. Hence, the loss of the Columbia Orbiter and the subsequent decision by NASA to focus remaining Space Shuttle flights on the International Space Station had threatened HST with an early demise. However, in Oct 2006 NASA Administrator Mike Griffith announced that a Shuttle flight, scheduled for 2008 but then delayed until May 2009, would be used for one last servicing mission. This will not only extend Hubble's lifetime to at least 2013 but will also see two powerful new instruments installed that will give Hubble unprecedented abilities.

One of the new instruments, called the Wide Field Camera 3 (WFC3), will operate across a wide range of wavelengths including ultraviolet, visible and infrared and should be especially useful in studying the early universe. To make room for it, the Wide Field Planetary Camera 2, which was installed in 1993, will be removed. WFC3's sensitivity and wide field of view will make it 15 to 20 times more efficient at searching for faint, distant galaxies than NICMOS, which has previously been used for this sort of work. That will enable WFC3 to see fainter, more distant and more ancient objects than any previous Hubble instrument. WFC3 will be useful for trying to understand what caused primordial hydrogen gas to be stripped of its electrons early in the universe's history in a process called reionization.

The second instrument to be installed in 2009, called the Cosmic Origins Spectrograph (COS), will measure the spectra of objects at ultraviolet wavelengths. It will restore some abilities lost when the STIS stopped working. COS will be especially useful for studying the interstellar medium and how star formation and supernovae have affected it.

By the time Hubble is retired it is expected that a larger and more powerful space observatory, the James Webb Space Telescope, will be in orbit.