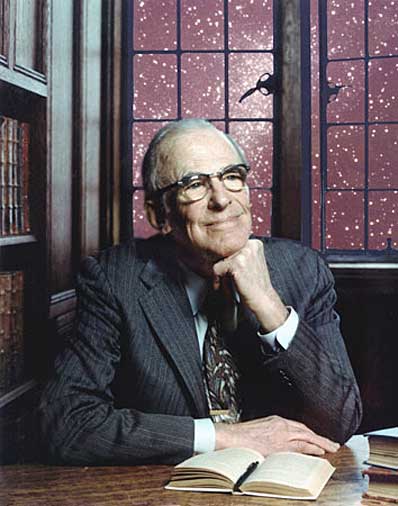 Lyman Spitzer was a prominent American astrophysicist who advanced knowledge of physical processes in interstellar space and pioneered efforts to harness nuclear fusion as a clean energy source. Spitzer made major contributions in stellar dynamics and plasma physics, and founded the study of the interstellar medium, investigating in detail interstellar dust grains and magnetic fields as well as the motions of star clusters and their evolution. He studied regions of star formation and was among the first to suggest that bright stars in spiral galaxies formed recently. In 1946, he became the first to propose placing a large telescope in space. He then devoted the next 50 years of his career to making this vision a reality. His efforts led to two successful NASA space telescopes: the Copernicus satellite and the Hubble Space Telescope.

Lyman Spitzer was born on 26 June 1914 in Toledo, Ohio. He attended Yale University where he earned his Bachelor's degree in physics in 1935 and then spent a year at Cambridge University. In 1936, Spitzer entered Princeton University where he earned his Master's degree in 1937 and a Doctorate in astrophysics in 1938 while working under the famous astronomer Henry Norris Russell. After receiving his doctorate, he spent a year as a postdoctoral fellow at Harvard University and then joined the faculty of Yale University in 1939.

During World War II, Spitzer did underwater sound research, working with a team that led the development of sonar. When the war was over, Lyman Spitzer returned to teach at Yale for a brief time. Then, in 1946, more than a decade before the first satellite was launched into space and twelve years before NASA was formed, Spitzer proposed that an observatory be placed in space where it would be able to detect a wide range of wavelengths and be free from the blurring effects of our atmosphere. He proposed that a telescope in space would reveal much clearer images, of even far-off objects, than any ground-based telescope. He wrote a paper entitled "Astronomical Advantages of an Extra-Terrestrial Observatory" which described in detail the advantages of putting a telescope in space. He would work for the next 50 years on making this vision a reality.

In 1947, at the age of 33, Lyman Spitzer, Jr. was appointed chairman of Princeton's astrophysical sciences department, succeeding Henry Norris Russell. He also became the director of Princeton's Observatory. Along with Martin Schwarzschild, he built the department into a major research facility.

While at Princeton, Spitzer made many contributions to the field of astrophysics. He is considered the founder of study of the interstellar medium — the gas and dust between the stars from which new stars are formed. Spitzer studied in detail interstellar dust grains and magnetic fields as well as the motions of star clusters and their evolution. He studied regions of star formation and was among the first to suggest that bright stars in spiral galaxies formed recently from the gas and dust there. He also accurately predicted the existence of a hot galactic halo surrounding our Milky Way galaxy.

In 1951, Spitzer founded the Princeton Plasma Physics Laboratory (originally called Project Matterhorn) which was Princeton's pioneering program in controlled thermonuclear research. He pioneered efforts to harness nuclear fusion as a clean source of energy and remained the Laboratory's director until 1967. A year later, in 1952, Spitzer was named the Charles A. Young Professor of Astronomy at Princeton, a title that he would keep for the rest of his life.

From 1960 to 1962, Spitzer served as president of the American Astronomical Society. With the development of the US space program in the 1960s, Spitzer's idea of astronomy from space was finally beginning to look more promising. In 1962, he led a program to design an observatory which would orbit the Earth and study the ultraviolet light from space, which is normally blocked by our atmosphere. This observatory became NASA's successful Copernicus satellite which operated between 1972 and 1981.

In 1965, the National Academy of Sciences established a committee to define the scientific objectives for a proposed Large Space Telescope. Lyman Spitzer, Jr. was chosen to head this committee. Many astronomers did not support the idea of a space telescope and were concerned that the cost would reduce support for ground-based astronomy. Spitzer put great effort into convincing the scientific community, as well Congress, of the great value of placing a large telescope into space. In 1968, Spitzer's dream of putting a telescope in space began to come true, with the launch of the highly successful Orbiting Astronomical Observatory.

Between 1973 and 1975, Lyman Spitzer, Jr. was awarded several prestigious honors. In 1973 he was awarded the Catherine Wolfe Bruce gold medal by the Astronomical Society of the Pacific. In 1974, the National Academy of Sciences awarded him the Henry Draper Medal "for his vision and distinguished achievements in space astronomy and for his many outstanding contributions to the physics of plasmas on earth and in the interstellar medium." In 1975, he was awarded the first James Clerk Maxwell Prize for Plasma Physics by the American Physical Society for "his pioneering investigations of the behavior of plasma" and guiding and inspiring "a generation of plasma physicists through his research and leadership in the controlled thermonuclear program."

Spitzer continued to lobby NASA and Congress to develop a space telescope. Finally, in 1975, NASA, along with the European Space Agency, began development of what would become the Hubble Space Telescope. A year later, in 1976, NASA awarded him its Distinguished Public Service Medal for "his pioneering efforts in rocket and high altitude balloon astronomy, his outstanding contributions to space astronomy as principal investigator on the highly successful Orbiting Astronomical Observatory, Copernicus, and his vision and leadership in articulating the advantages and benefits to be realized from the Space Telescope Program." In 1977, due in large part to Spitzer's continuous efforts, Congress approved funding for the construction of the Space Telescope.

Between 1978 and 1985, Spitzer was again awarded several high honors including the Gold Medal of the Royal Astronomical Society (1978), National Medal of Science (1979), Jules Janssen Medal of the Societe Astronomique de France (1980), and the Crafoord Prize of the Royal Swedish Academy (1985), which is the equivalent of the Nobel Prize in fields excluded from those awards.

Spitzer passed away suddenly on 31 March 1997 at the age of 82. He had just completed a normal working day at Princeton University, discussing astronomy with his colleagues and analyzing results from the Hubble Space Telescope, the instrument he dreamed of in 1946. He left behind his wife, Doreen Canaday Spitzer, four children, and ten grandchildren.

Spitzer was considered to be a man of "incredible discipline, diligence and politeness." He loved mountain-climbing and skiing and was a member of the American Alpine Club to which he contributed a grant which promoted "state-of-the-art, cutting-edge climbing through financial support of small, lightweight climbing teams attempting bold first ascents or difficult repeats of the most challenging routes in the world's great mountain ranges."

On 25 August 2003, NASA launched a new space telescope. The observatory consists of a large and lightweight telescope, and three cryogenically-cooled science instruments capable of studying the Universe at near- to far-infrared wavelengths. Incorporating state-of-the-art infrared detector arrays, and launched into an innovative Earth-trailing solar orbit, the observatory is orders of magnitude more capable than any previous space-borne infrared telescope. NASA has named this new facility the Spitzer Space Telescope, to honor the vision and contributions of Lyman Spitzer, Jr.