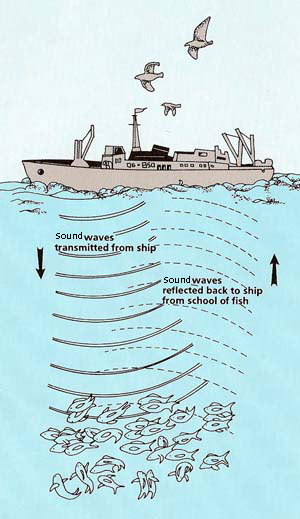 Sonar (from SOund Navigation And Ranging) is a technique used at sea for detecting and determining the position of underwater objects (e.g., submarines, shoals of fish) and for finding the depth of water under s ship's keel. Sonar works on the principle of echolocation: high-frequency sound pulses are beamed from the ship and the direction of and time taken for any returning echoes are measured to give the direction and range of the reflecting objects. Radar works in the same way but using radio waves.

Sonar was developed principally for the detection of submarines and to act as a submarine commander's "ear" for the detection of other vessels, minefields, submerged ice, wrecks and other underwater hazards. Sonar can be "active" or "passive". In active sonar, an acoustic wave is transmitted and its echo picked up (1). In passive sonar, other vessels are detected by listening for noise generated by their engines. Today sonar is also used by fishing vessels seeking shoals of fish and for surveying the ocean bed.