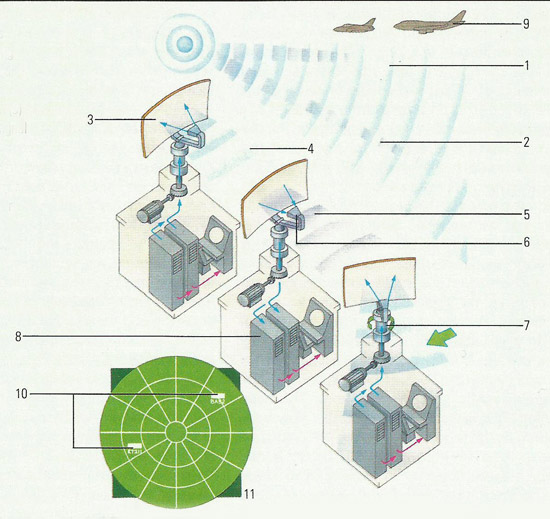 Radar is a method, system, or technique of using beamed, reflected, and timed radio waves for detecting, locating, or tracking objects (such as rockets), for measuring altitude, etc., in any of various activities, such as air traffic control or guidance.

Radar is also the electronic equipment or apparatus used to generate, transmit, receive, and, usually, to display radio scanning or locating waves; a radar set. The terms primary radar and secondary radar may be used when the return signals are, respectively, by reflection and by the transmission of a second signal as a result of triggering responder beacon by the incident signal. "Radar" is an abbreviation of "radio detection and ranging."

A radar (radio detection and ranging) system that detects long-range objects and determines their position by measuring the time taken for radio waves to travel to the objects, be reflected, and return. Radar is used for navigation, air control, fire control, storm detection, in radar astronomy, and for catching speeding drivers. It developed out of experiments in the 1920s measuring the distance of the ionosphere by radio pulses. Robert Watson-Watt showed that the technique could be applied to detecting aircraft, and from 1935 Britain installed a series of radar stations which were a major factor in winning the Battle of Britain in World War II. From 1940 the UK and the US collaborated to develop radar.

There are two main types of radar: continuous-wave radar, which transmits continuously, the frequency being varied sinusoidally, and detects the signals received by their instantaneously different frequency; and the more common pulsed radar. This latter has a highly directional antenna which scans the area systematically or tracks an object. A cavity magnetron or klystron emits pulses, typically 400 per second, 1 μs across, and at a frequency of 3 GHz. A duplexer switches the antenna automatically from transmitter to receiver and back as appropriate. The receiver converts the echo pulses to an intermediate frequency of about 30 MHz, and they are then amplified, converted to a video signal, and displayed on a cathode-ray tube. A synchronizer measures the time-lag between transmission and reception, and this is represented by the position of the pulse on the screen. Various display modes are used: commonest is the plan-position indicator (PPI), showing horizontal position in polar coordinates.

Robert Watson-Watt was a Scottish physicist largely responsible for the development of radar, patenting his first 'radiolocator' in 1919. He perfected his equipment and techniques from 1935 through the years of World War II, his radar being largely responsible for the British victory in the Battle of Britain. Watson-Watt was a descendant of James Watt, inventor of the practical steam engine. He adopted his double-barreled name after receiving his knighthood.

Watson-Watt studied at St Andrews University, taught at Dundee University, and in 1917 worked in the Meteorological Office, designing devices to locate thunderstorms, and investigating the ionosphere (a term he coined in 1926). He became head of the radio section of the National Physical Laboratory (1935), where he began work on locating aircraft.

Radar astronomy is the use of radar to measure the topography, rotation rate, and distance of objects in the solar system, including the Moon, planets, and asteroids, and to detect meteors. Ground-based radar astronomy, with the exception of meteor work, demands the use of large radio telescopes. Some space probes, such as Magellan at Venus and Mars Express, have been equipped with radar to study the surface and subsurface of planets from orbit.

A radar meteor is a meteor detected by bouncing a radar signal off the train of ionized air left in its wake.

When meteors strike the Earth's atmosphere at speeds of tens of thousands of kilometers per hour they ionize the air in their path. These luminous ionized trails are not only visually striking – they also reflect radio waves. During a shower like the Leonids, radio signals from TV stations, radar facilities, and AM/FM transmitters are constantly bouncing off meteor trails. The echoes can be heard around the world.

Most meteor echo enthusiasts listen for reflections of distant radio transmitters at frequencies between 40 MHz and 100 MHz. These are the best bands for such work because weakly ionized meteor trails reflect signals most efficiently at lower frequencies, below 100 MHz.