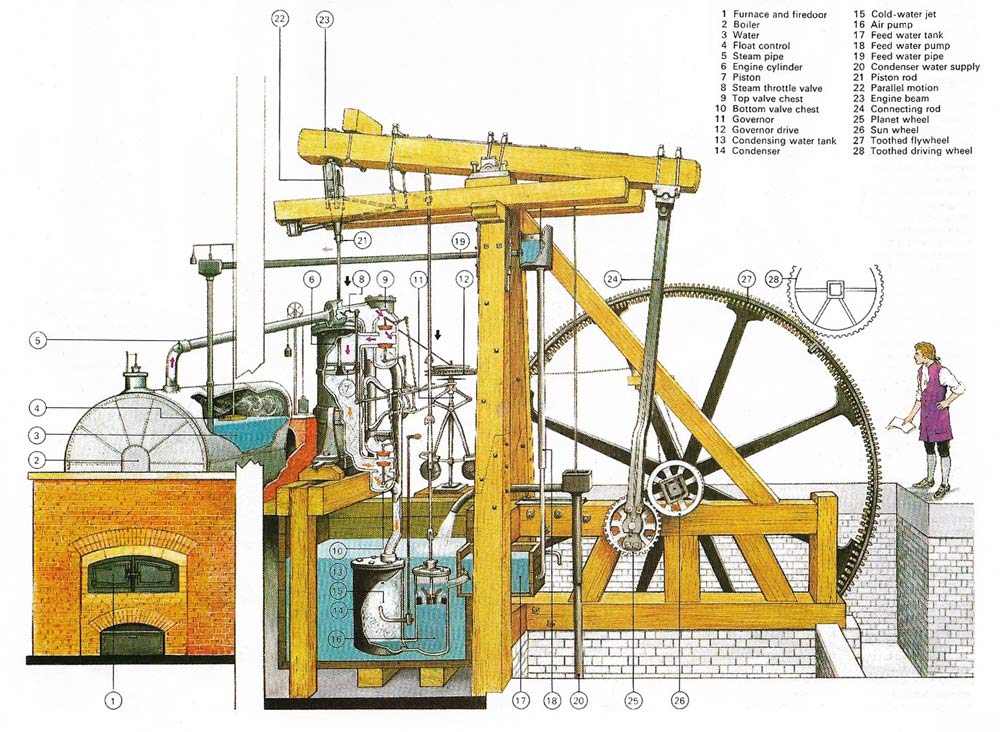 James Watt's engine of 1769 reduced fuel consumption by separating the condenser and the cylinder, but it was still only a pumping engine. The growing industries needed power to drive machines, provided by Watt's double-acting engine of f1784. It included the basic features of modern engines, and was a great advance on the Newcomen engine. A furnace (1) heated the base and sides of a boiler (2). Steam at a pressure of 7 lb/sq in passed into a cylinder (6) which was closed at the top to allow the steam to drive the piston (7) both down and upward. The effort was transmitted via a parallel motion linkage (22) to the beam (23) which rocked about its center. Its movement was transmitted to the factory via the connecting rod (24), which had a non-rotating planet wheel (25) fixed rigidly at the end, driving the sun wheel 26) on the flywheel shaft. The sun and planet wheels were kept in mesh by a link behind them. Teeth on the flywheel (27) meshed with those of the pinion (28) at the end of the mill drive shaft. The engine framing was made of timber, and the engine speed was controlled by the governor (11). Steam was let in and out of the cylinder by two pairs of valves, and the exhaust was condensed in (14) by the cold water jet (15). Air and water were removed by a pump (16), and water pumped to the boiler by (18) via the float control (4).

James Watt was a Scottish engineer and inventor. His first major invention was a steam engine with a separate condenser and thus far greater efficiency. For the manufacture of such engines he entered partnership with John Roebuck and later (1775), more successfully, with Matthew Boulton. Between 1775 and 1800 he invented the sun-and-planet gear wheel, the double-acting engine, a throttle valve, a pressure gauge, and the centrifugal governor – as well as taking the first steps toward determining the chemical structure of water. He also coined the term horsepower and was a founder member of the Lunar Society.