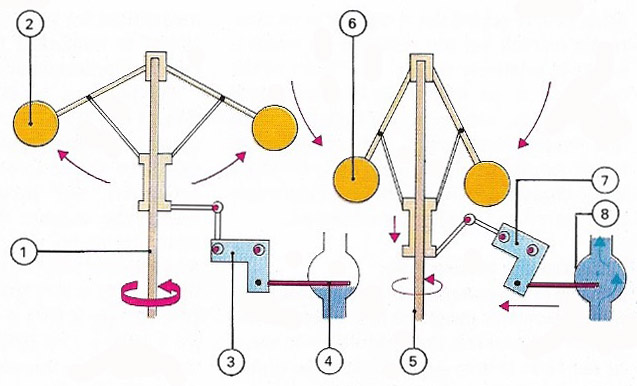 Designed by James Watt in 1788, this original flyball governor controlled the speed of a steam engine. The shaft (1) is driven by the steam engine, causing the revolving weights (2) to move outward under the action of centrifugal force. As they move, the control linkage (3) gradually closes the steam valve (4) between the boiler and the engine until a point of equilibrium is reached. If the engine speeds up for any reason, the weights move further out, throttling back the steam and slowing down the engine (5). As the weights move downward and inward (6), the control linkage (7) gradually opens the valve again (8). Overall, the result is a working engine whose speed is largely independent of its load.

A governor is a device that maintains the speed of a machine constant despite load variation, often by controlling the fuel supply. The common flyball governor (Fig 1 and below) works by the centrifugal force of two rotating weights, acting against a spring. See also servomechanism.