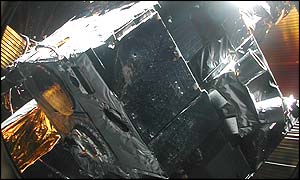 Mars Express is a European Space Agency mission that was launched at 17:45 GMT on Jun 2, 2003 by a Soyuz-Fregat rocket from Baikonur and entered orbit around Mars in late December of the same year. It is the first spacecraft to use radar to penetrate the surface of Mars and to map the distribution of possible underground water deposits. It carries a remote observation payload with some heritage from European instruments lost on the ill-fated Mars 96, a communications package to support Mars lander missions from 2003 to 2007, and the Beagle 2 lander. Having dropped off its passenger, Mars Express began using its sounding radar, called Marsis, to search below the surface for water. It also carries an ultraviolet and infrared spectrometer, known as Spicam, to study the atmosphere over the course of a martian year.

The probe, weighing in at 1,120 kg, was built on ESA's behalf by a European team led by Astrium. Following reactivation of its systems at the end of November, Mars Express prepared to release Beagle 2. The 60-kg capsule containing the tiny lander did not incorporate its own propulsion and steering system and was released into a collision trajectory with Mars, on Dec 20. It entered the martian atmosphere on Christmas day, after five days' ballistic flight. Meanwhile, the Mars Express probe proper performed a series of maneuvers through to a capture orbit. At this point its main motor fired, providing the deceleration needed to acquire a highly elliptical transition orbit. Attaining the final operational orbit called for four more firings. This 7.5 hour quasi-polar orbit took the probe to within 250 km of the planet.

The Mars Express orbiter will carry out a detailed investigation of the planet, pointing its instruments at Mars for between half-an-hour and an hour per orbit and then, for the remainder of the time, at Earth to relay the information collected in this way. The orbiter's seven onboard instruments are expected to provide considerable information about the structure and evolution of Mars. A very high resolution stereo camera, the HRSC, will perform comprehensive mapping of the planet at 10-m resolution and will even be capable of photographing some areas to a precision of barely 2 m. The OMEGA spectrometer will draw up the first mineralogical map of the planet to 100-m precision.

This mineralogical study will be taken further by the PFS spectrometer – which will also chart the composition of the martian atmosphere, a prerequisite for investigation of atmospheric dynamics. The MARSIS radar instrument, with its 40-m antenna, will sound the surface to a depth of 2 km, exploring its structure and, most importantly, searching for pockets of water.

Another instrument, ASPERA, will be tasked with investigating interaction between the upper atmosphere and the interplanetary medium. The focus here will be on determining how and at what rate the solar wind, in the absence of a magnetic field capable of deflecting it, scattered the bulk of the martian atmosphere into space. Atmospheric investigation will also be performed by the SPICAM spectrometer and the MaRS experiment, with special emphasis on stellar occultation and radio signal propagation phenomena.

The orbiter mission should last at least one martian year (687 days), while Beagle 2 had been expected to operate on the planet's surface for 180 days. This first European mission to Mars incorporates some of the objectives of the Euro-Russian Mars 96 mission, which came to grief when the Proton launcher failed. And indeed a Russian partner is cooperating on each of the orbiter's instruments. Mars Express forms part of an international Mars exploration program, featuring also the US probes Mars Global Surveyor and Mars Odyssey, the two Mars Exploration Rovers, and the Japanese probe Nozomi. Mars Express may perhaps, within this partnership, relay data from the NASA rovers while Mars Odyssey may, if required, relay data from Beagle 2.

The mission's scientific goals are of outstanding importance. Mars Express will, it is hoped, supply answers to the many questions raised by earlier missions – questions concerning the planet's evolution, the history of its internal activity, the presence of water below its surface, the possibility that Mars may at one time have been covered by oceans and thus have offered an environment conducive to the emergence of some form of life, and even the possibility that life may still be present, somewhere in putative subterranean aquifers. In addition the lander doing direct analysis of the soil and the environment comprises a truly unique mission.

Mars Express, drawing heavily on elements of the Rosetta spacecraft awaiting to be launched to a comet next year, paves the way for other ESA-led planetary missions, including Venus Express, launched in 2005, and the BepiColombo mission to Mercury at the end of the decade. It is a precursor too for continuing Mars mission activity under Aurora, ESA's program of exploration of our solar system.