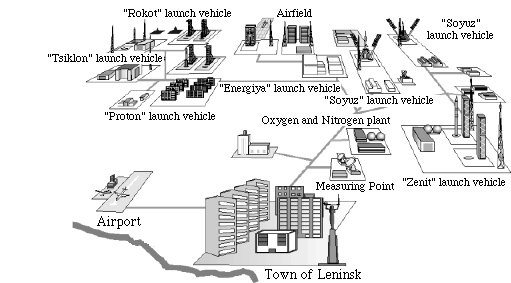 Baikonur is the largest of three major Russian launch complexes, the oldest space-launching facility, and the only one used for crewed launches. The designations NIIP-5 and GIK-5 are used in official Soviet histories when referring to Baikonur. It was also referred to as Tyuratam by both Soviet military staff and engineers and by US intelligence agencies. Baikonur Cosmodrome, which since the breakup of the Soviet Union is actually on foreign (i.e., non-Russian) soil, extends 85 km from north to south and 125 km from east to west – a territory as large as Moldova. As well as dozens of launch pads, Baikonur hosts five tracking control centers, nine tracking stations, and a 1,500-km rocket test range.

Baikonur Cosmodrome is located in a region of flat grasslands in the former Soviet republic of Kazakhstan, northeast of the Aral Sea at 45.6° N, 63.4° E. 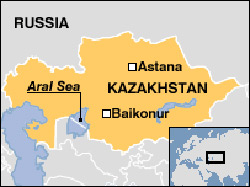 Although typically not as active as Plesetsk, this site is used for all Russian manned and planetary missions. Construction of the secret missile site began in 1955 and it was from here that the first artificial satellite, Sputnik 1, and the first manned spacecraft, Vostok 1, were launched. All subsequent Russian manned missions, as well as geostationary, lunar, planetary, and many ocean surveillance missions, have lifted off from Baikonur. Until recently, its designation was intentionally misleading. The former Soviet Union used the name and coordinates of a small mining town, Baikonur, to describe its secret rocket complex, with the aim of concealing its true location. In fact, the launch complex is about 370 km southwest of Baikonur town, near the railway station and village of Tyuratam and close to Leninsk city. However, in 1998, Leninsk city was renamed Baikonur city.

When the USSR collapsed, there were fears it would mean the end for the cosmodrome too. But independent Kazakhstan agreed to lease the site to Russia. That lease now extends until 2050. Moscow has been developing Plesetsk in the Russian far north. But its location makes it unfit for most commercial launches. Baikonur's facilities are now in regular demand for commercial satellite launches and to supply the International Space Station. Kazakhstan also has plans to launch its own satellites from the complex and Russia and Kazakhstan together are developing a more environmentally-friendly launch facility. Kazakhstan wants to reduce the pollution from rocket fuel and debris which often falls on its territory.