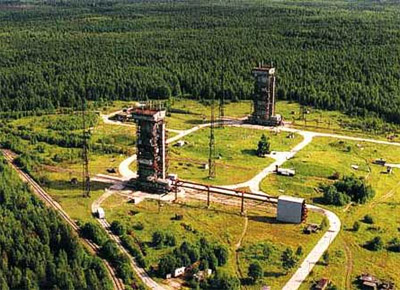 Plesetsk Cosmodrome is a Russian launch complex and missile test range, located at 62.8° N, 40.4° E, which has launched the most satellites since the beginning of the Space Age. Built in 1960, south of Archangel in northern Russia, its existence was not officially acknowledged by the Soviet Union until 1987 but became publicly known in the West after the tracking of Cosmos 112 by a schoolboy-team at Kettering Grammar School in England. Prior to this, it had been the source of many UFO reports from people living below the site's launch trajectories. Western journalists allowed on to the site in 1989 were told of two fatal accidents that had happened there: on June 26 1973, nine technicians were killed in a launch pad accident and on March 18 1980, 50 technicians were killed by an explosion while fuelling a Soyuz booster.

Plesetsk's location makes it ideal for launching into polar or high-inclination orbits (63–83° inclination) – those typically favored by military reconnaissance and weather satellites. Between 1969 and 1993 it was the busiest spaceport in the world, accounting for more than a third of all orbital or planetary missions. It continues to be highly active today, especially for military launches and all Molniya-class communications satellites.

Plesetsk has traditionally supported four launch vehicle types: Cosmos-3M, Soyuz/Molniya, Tskylon-3, and Start. The Russian government is keen to shift more activity, especially unmanned launches, away from Baikonur (which first surpassed Plesetsk in number of launches in 1993) since its current agreement with Kazakhstan to use that facility expires in 2014. To this end, a program has been put in place to build the launch support infrastructure for the new Angara vehicle at the northernmost spaceport. The first launch of this new generation heavy-lift booster is expected to take place in Plesetsk in 2010 or 2011. Meanwhile, commercial space operations using the existing launch vehicles are set to be intensified at Plesetsk.