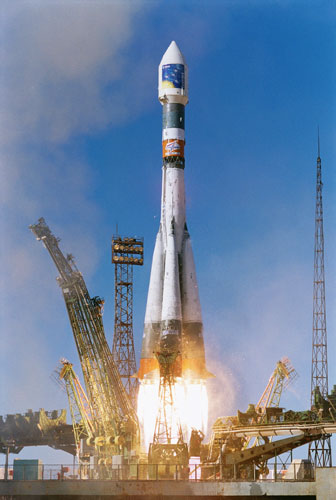 The Soyuz launch vehicle is the most used and reliable launch vehicle in the history of spaceflight. By the dawn of the twenty-first century, more than 1,600 Soyuz rockets of various kinds had been launched with an unparalled success rate of 97.5% for production models. The two-stage Soyuz that presently transports cosmonauts and astronauts to the International Space Station is simply a more powerful variant of the original Sputnik launch vehicle, with a first stage derived directly from the R-7 ballistic missile (see "R" series of Russian missiles) and a two-engine second stage. It can lift up to 7,500 kg into low Earth orbit and, in addition to launching manned Soyuz spacecraft and unmanned Progress supply craft, has been used to launch a wide variety of scientific and military satellites.

Today, Soyuz is marketed internationally by STARSEM, a joint Russian/French consortium. Work is underway to develop the Soyuz 2 and Soyuz Fregat-upgraded versions of the current Soyuz and Molniya vehicles. Plans called for engine performance improvements to the first stage core and liquid strap-on boosters, a new second stage based on the RD-0124 staged combustion liquid oxygen/kerosene engine, a new flight control system, and the addition of an Ariane 4 payload fairing option.