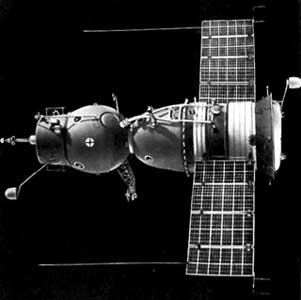 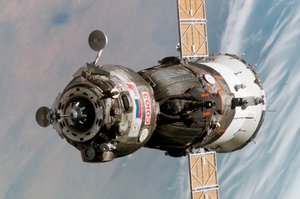 Soyuz is a series of manned Russian spacecraft, in use longer than any other; it is carried into orbit by the Soyuz launch vehicle. Designed during the Space Race era, Soyuz first carried a cosmonaut in April 1967. Since then the original Soyuz ("union") craft and its subsequent generations – the Soyuz T, TM, and TMA – have flown scores of manned missions. Although modifications have made the spacecraft more efficient and reliable, the basic structure remains the same.

A Soyuz spacecraft has three main components. The orbital module at the front is an egg-shaped section, 2.2 x 2.7 m, that provides space for the cosmonauts to work in once they are in space. The descent module in the middle is a bell-shaped section, about 2.2 m long and 2.2 in diameter, in which the cosmonauts sit during launch and upon their return to Earth. The instrument module at the back is cylindrical and measures 2.7 m wide and 2.3 m long. As the spacecraft evolved, more efficient electronics and navigation systems were added and the landing module interior was rearranged to make it more spacious. A version of Soyuz is being used as a crew rescue vehicle serving the International Space Station.

The manned Soyuz spacecraft was originally conceived by Sergei Korolev in 1961 as a component of the "Soyuz complex" that also included unmanned booster modules and orbiting fuel tankers and was geared toward a manned mission to the Moon (see Russian manned lunar programs). When this plan was abandoned, only the crewed vessel remained: its new primary task that of a space station ferry.

The first version of Soyuz could accommodate three cosmonauts in the cramped descent module, but only if spacesuits were not worn. Power was provided by a pair of solar arrays on either side of the instrument module which were folded during launch. Once in space the crew could enter the orbital module to conduct experiments. This module could also be depressurized to serve as an airlock for cosmonauts to perform spacewalks. Although the forward section of the orbital module did have provision for docking to another Soyuz, there was no connecting hatch so that crew exchanges could only be accomplished by spacewalks. At the end of the flight the crew returned to the descent module which was equipped with a heat-shield, separated from the other two modules, and reentered. The descent was slowed by a single large parachute and, just 2 m above the ground, by four small rocket motors on the capsule's base.

After several unmanned tests, the first Soyuz was launched on April 23, 1967, at 3:35 a.m. local time – the first night launch of a crewed vehicle – with pilot Vladimir Komarov on board. Once in orbit it was to have served as a docking target for Soyuz 2 and its crew of three. After the docking, the two engineers were to have transferred to Soyuz 1 and returned home with Komarov. However, Soyuz 2 was never launched because of a problem with Soyuz 1 in orbit. After just over a day in space and several failed deorbit attempts, Soyuz 1 successfully reentered the atmosphere but then crashed to the ground after its parachute lines became tangled, killing Komarov. Although there had been a catalogue of shortcomings with Soyuz before launch, Soviet premier Brezhnev wanted a spaceflight to commemorate the 50th anniversary of the Communist revolution. Cosmonauts had prepared a document listing 200 technical problems and gave it to high-ranking officials. Yuri Gagarin, the first person in space and backup pilot for Soyuz 1, also tried unsuccessfully to convince Brezhnev to cancel the launch. Both Komarov and Gagarin, who were good friends, knew that the pilot of Soyuz 1 would be in great danger. A few weeks before launch, Komarov said, "If I don't make this flight, they'll send the backup pilot instead. That's (Yuri), and he'll die instead of me." Following the accident, Gagarin said, "... if I ever find out he (Brezhnev) knew about the situation and still let everything happen, then I know exactly what I'm going to do." Rumor has it that Gagarin did eventually catch up with Brezhnev – and threw a drink in his face. A successful crew exchange first took place on a later mission. Three cosmonauts were launched on Soyuz 5 (Boris Volynov, Alexei Yeliseyev and Yevgeni Khrunov), and one aboard Soyuz 4 (Vladmir Shatalov). For the trip back, Yelisyev and Khronuv switched to Soyuz 4 thus becoming the first humans to return to Earth in a craft other than the one in which they were left.

Three-man missions involving a Soyuz modified by the removal of large fuel tank at the rear of the instrument module (not needed with the abandonment of the Moon plan) and the addition of a new docking system with a hatch to allow cosmonauts to transfer to a space station without a spacewalk. Soyuz 10 briefly docked with Salyut 1. Soyuz 11 docked with the station normally but its crew was killed during reentry when a valve opened suddenly and allowed all the air in the descent module to escape. The cosmonauts, who wore no pressure suits, died apparently before they had realized what was happening.

Shocked by the catastrophe of Soyuz 11, Soviet engineers overhauled the Soyuz spacecraft to increase safety. Never again would cosmonauts go to and from orbit without pressure suits. To make room for the emergency life-support system needed for the suits, the standard Soyuz crew was reduced from three to two. There were no more fatalities in the program; however, Lazarev and Makarov, aboard Soyuz 18-1, had a lucky escape after half the explosive bolts holding the first and second stages of their Soyuz booster together failed to blow. Forced to abort the launch, they suffered a harsh reentry from 140 km up before their capsule hit a mountain near the Chinese border, rolled down side, and left the crew to spend a day huddled round a fire waiting for rescue. The most famous of the Soyuz missions in this period was Soyuz 19 which took part in the Apollo-Soyuz Test Project.

First flown in December 1979, the T was equipped with more compact electronics which enabled the descent module to hold three spacesuited cosmonauts. It also carried solar panels – a feature of early Soyuz spacecraft that had been dispensed with after Soyuz 11 to save weight-enabling the vehicle to function independently of Salyut for up to four days.

A modernized version of the T with improved power supplies, new parachutes, and extra space for equipment. It can carry an extra 200 kilograms into orbit and return up to 150 kilograms to Earth – 100 kg more than Soyuz T. First used with Mir, it remain in service ferrying cosmonauts, astronauts, and freight to and from the ISS.

A specially adapted version of the Soyuz spacecraft to serve as an lifeboat for crew return to Earth in the event of an emergency aboard the ISS.