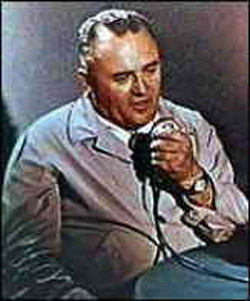 Sergei Korolev was a Ukrainian-born rocket designer and engineer who masterminded the Soviet Union's early success in space. As a youngster he was inspired by aviation and trained in aeronautical engineering at the Kiev Polytechnic Institute. Upon moving to Moscow, he came under the influence and guidance of aircraft designer Andrei Tupolev and cofounded the Moscow rocketry organization GIRD. Like the Verein für Raumschiffahrt in Germany, and Robert Goddard in the United States, GIRD was by the early 1930s testing liquid-fueled rockets of increasing size. Seeing the potential of these devices, the Russian military seized control of GIRD and replaced it with RNII (Reaction Propulsion Scientific Research Institute). RNII developed a series of rocket-propelled missiles and gliders during the 1930s, culminating in Korolev's RP-318, Russia's first rocket-propelled aircraft. But before the aircraft could make a powered flight, Korolev was denounced by colleagues to the NKVD (forerunner to the KGB), arrested, beaten, and, along with other aerospace engineers, thrown into the Soviet prison system during the peak of Stalin's purges in 1937-38. Korolev spent months in transit on the Trans-Siberian railway and on a prison vessel at Magadan, followed by a year in the Kolyma gold mines, the most dreaded part of the Gulag. However, Stalin soon recognized the importance of aeronautical engineers in preparing for the impending war with Hitler, and set up a system of sharashkas (prison-factories) to exploit the incarcerated talent. Loyalty to the Soviet Union was a hallmark of these gifted innovators: Korolev never believed that Stalin was behind his arrests, even though he wrote numerous letters to the Soviet leader protesting his innocence, without reply.

In the end, Korolev was saved by the intervention of Tupolev, himself a prisoner, who requested his services in the TsKB-39 sharashka. Later, Korolev was moved to another sharashka in Kazan where he led design projects to build jet engines and rocket thrusters. His rehabilitation was complete when he was released and sent to Germany to gather information on the V-2, collecting hardware and German expertise to reestablish Soviet rocket and missile technology. After the War and throughout the 1950s, Korolev concentrated on devising Russian alternatives to the V-2 and establishing a powerful Soviet rocket-production industry (see "R" series of Russian missiles). Trials produced the multistage R-7 with a range of 6,400 km, providing the Soviet Union with an intercontinental ballistic missile (ICBM) capable of reaching the United States. To speed development of the R-7, Korolev's other projects were spun off to a new design bureau in Dnepropetrovsk headed by his one-time assistant, Mikhail Yangel. This was the first of several design bureaus, some later competing with Korolev's, that would spring up once Korolev had perfected a new technology. Such immense strategic importance had Korolev's rocket and missile program acquired that it was controlled at a high level in the Soviet government by the secret Committee Number 2. In Sep 1953, Korolev proposed the development of an artificial satellite to this committee arguing that the R-7-launched flight of Sputnik 1 would serve as a powerful public demonstration of the Soviet Union's ICBM capability. A year later, he put forward even more ambitious plans, for a "two-to-three-ton scientific satellite", a "recoverable satellite," a "satellite with a long orbital stay for one to two people," and an "orbital station with regular Earth ferry communication." All of these were subsequently realized: Sputnik 3 flew in 1958 followed by the first spy satellite Zenit in 1962, the cosmonauts in Vostok in 1963 and Voskhod in 1964 broke long-endurance records, and the first space station Salyut was flown in 1971.

The Soviet lunar program depended heavily on the high technical performance of Korolev's rocket systems and the industrial infrastructure that he built up, as well as his political influence, drive, and determination. At first, all went well. Plans to explore the Moon, eventually using astronauts, were presented in 1957. Successful flyby, landing, and lunar orbital flights were accomplished in quick succession during 1959. But it was clear that these missions were achieved at the limits of the technology available with the R-7 launcher. Sending people to the Moon demanded a much bigger launch vehicle and advances in electronics and guidance systems, and when the Moon race became official policy after President Kennedy's declaration in 1961, the Soviet military-industrial complex failed to keep up. Korolev concentrated his resources on the N-1 rocket, using a cluster of 30 R-7-type engines. An alternative from the military sector called UR-500K which used storable propellants emerged as a competitor. Bureaucratic intervention and personality clashes led to indecision and both projects were supported, but at inadequate levels. The Soviet heavy-lift launchers could not compete with NASA's Saturn and Apollo programs and when Korolev died suddenly following surgery in 1966, the Soviet Moon program faltered. The N-1 failed its test firings and was canceled in 1976 (though the UR-500K survived to become the Proton).

Korolev's legacy is the town named for him and Energia Rocket & Space Corporation (RCS Energia) – the modern Russian business organization that evolved from Korolev's design bureau - which built Mir and is now a partner with NASA in the production of the International Space Station. Korolev himself was classified as top secret throughout his career, and his name became publicly known only after his death.