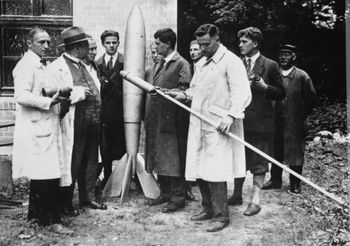 Verein für Raumschiffahrt (VfR), or Society for Space Travel, was an association of German enthusiasts which formed in 1927 and carried out important development work on liquid-fueled rockets. The stimulus for the society was the publication of Hermann Oberth's 1923 book Die Rakete zu den Planetenräumen (The Rocket Into Interplanetary Space).

Impressed by Oberth's mathematically-sound theories that space travel was achievable, the founders of VfR set out to build the types of rockets he described (see Mirak). The group grew in size to about 500 members, produced its own journal, Die Rakete (The Rocket), and obtained permission to use an abandoned ammunition dump in Reinickendorf, a suburb of Berlin, as test site for its projects. The facility soon became known as the Raketenflugplatz (rocket airfield) and served as an early proving ground for several men who would go on to play a key role in the German Army's World War II rocket program. One of the brightest young people involved at the Raketenflugplatz was 19-year-old Wernher von Braun, later chosen to head the Army's rocket development program. By 1932, VfR had fallen on hard times and hoped to secure funds from the Army for further testing. After a demonstration launch failed to impress attending officers, society members knew their days at the Raketenflugplatz were numbered. Still, the Army was impressed by von Braun and he was invited to write his graduate thesis on rocket combustion at Kummersdorf.

After Hitler came to power, Nazi Germany banned all rocket experimentation or rocket discussion outside of the German military. The rocket enthusiasts who had populated the Raketenflugplatz had to abandon their work or continue it in the military. Hauptmann Dornberger was now able to successfully recruit former members of the VfR, many of whom joined the Army organization at Kummersdorf.