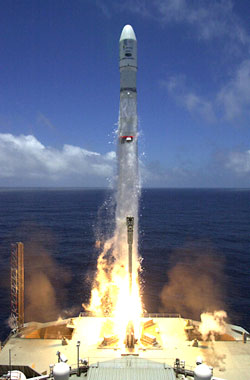 A Zenit 3SL rising from the Sea Launch platform.

Zenit ("zenith") traces its roots to work carried out by Mikhail Yangel's design bureau in Dnipropetrovsk as early as December 1974. In March 1976, the Soviet government issued a decree to develop a two-stage vehicle, 11K77, which later became known as Zenit-2, principally for launching large spy satellites into polar low Earth orbits. The 11K77's first stage was also adopted for use as a strap-on booster for the Energia super-heavy launch vehicle. The most challenging part of the Zenit project was the development of the 804,000-kg thrust, four-chamber RD-171 engine for the first stage. It took about 15 years and 900 firing tests for NPO Energomash in Moscow to perfect this ecologically-clean, liquid oxygen (LOX)/RP-1 burning propulsion unit. Zenit's second stage is equipped with a single RD-120 engine which uses the same propellants. The two-stage Zenit-2 is able to deliver payloads up to 15 tons into LEO, making it presently the second most powerful Russian booster after the Proton. Topped by an NPO Energomash third stage, it becomes the Zenit 3SL, which is used to transfer satellites into high altitude orbits.

The Zenit was designed to have a highly automated launch system and is able to launch in all types of weather. Officially, it can be assembled in 10 working days and made ready for launch just 21 hours after arrival on the pad.