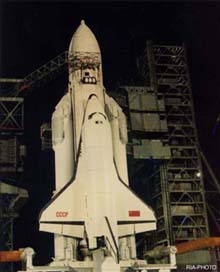 Energia is also the name of the booster for the Soviet Buran space shuttle, mothballed indefinitely in 1988.

Finally, Energia is a heavy launcher, Energia-M, proposed by Energia NPO as a derivative of the Buran launcher capable of delivering 30–34 tons to low Earth orbit but placed on hold through lack of financing and competition from the Angara project.