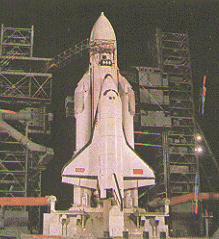 Buran and its Energia booster. 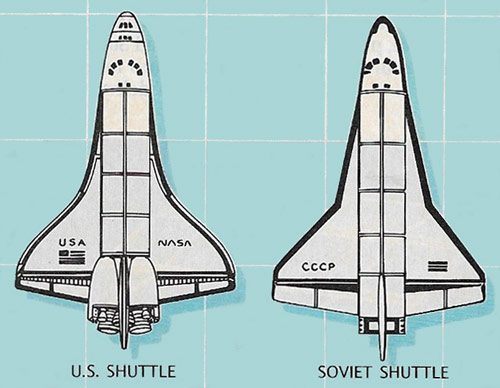 Space Shuttle compared with Buran. Each square is 10 meters wide.

Buran was a Soviet reusable shuttle externally very similar to the American Space Shuttle, but with two important differences: it could be flown automatically and it did not have reusable boosters. Also, unlike the Space Shuttle, Buran was fitted with ejector seats to allow its crew to escape at any stage during the flight; this was true even for crew members sitting in mid-deck, who would have ejected sideways.

Piloted tests of Buran ("Blizzard") fitted with ordinary jet engines were carried out extensively in the atmosphere. However, its first and only orbital flight, launched by a giant Energia rocket from Baikonur on November 15, 1988, was unmanned. This flight was completely successful and ended with an impressively precise runway landing.

Buran completed two orbits before returning to Earth about three hours later. The autopilot that landed the shuttle was able to overcome a 34 mph crosswind (which would have ruled out a landing of the US shuttle) to land within 3 meters of the runway center line. Also, of the 38,000 heat shield tiles that covered Buran, only 5 were missing.

Two more orbiters like Buran were manufactured, but after the sole unpiloted mission the program was canceled in 1993 due to funding problems.

Buran's spectacularly successful flight was the culmination of more than two decades' secretive effort by more than 600 Soviet institutions, beginning in 1976 and spearheaded by Valentin Glushko. One of the pioneers of Russian rocketry, Glushko engineered Buran to avoid some of the disadvantages of its American counterpart. The winged orbiter was perceived by the Kremlin primarily as response to what was seen as a military threat by the US shuttle, and Glushko hoped to exploit this paranoia to use Buran as a stepping-stone to the Moon, and perhaps even Mars. However, delays and overruns, combined with a crumbling Soviet economy, reduced Buran to a museum piece.