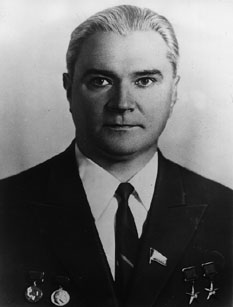 Valentin Glushko was a Soviet rocket scientist, a pioneer in rocket propulsion systems, and a major contributor to Soviet space and defense technology. He was born in Odessa, Ukraine. After graduating from Leningrad State University (1929), Glushko headed the design bureau of the Gas Dynamics Laboratory in Leningrad and began research on electrothermal, solid-fuel, and liquid-fuel rocket engines. In 1935, he published "Rockets, Their Construction and Utilization." From 1932 to 1966, Glushko worked closely with renowned rocket designer Sergei Korolev, the two achieving their greatest triumphs in 1957 with the launching of the first intercontinental ballistic missile in August and the first successful artificial satellite, Sputnik 1, in October. In 1974 Glushko was named chief designer of the Soviet space program, in which he oversaw the development of the Mir space station. He received numerous official honors, including the Lenin Prize (1957) and election to the Soviet Academy of Sciences (1958).