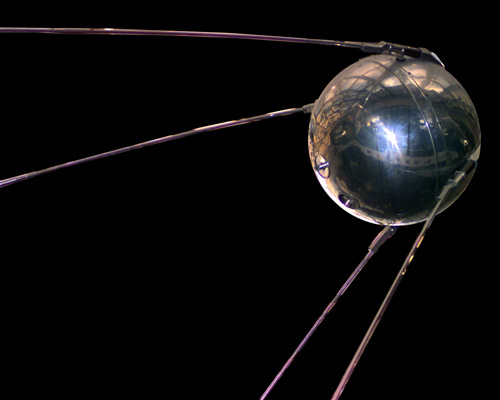 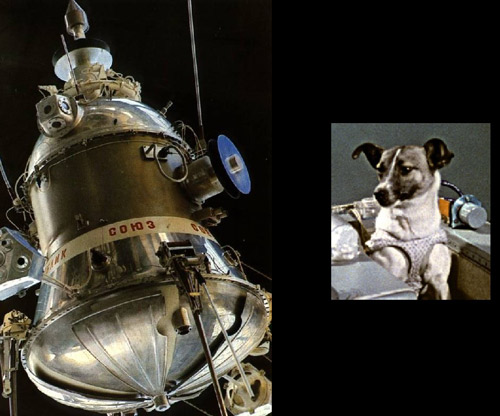 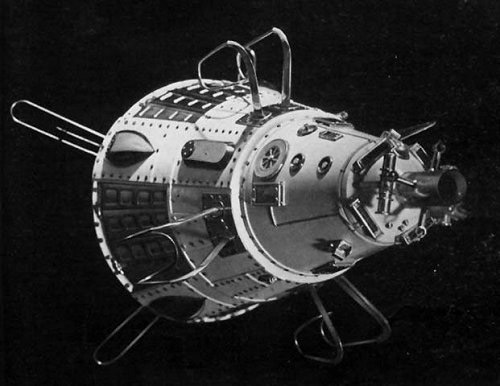 Sputnik was a series of satellites launched by the Soviet Union at the dawn of the Space Age. "Sputnik" (satellite) was the abbreviated Western name for these spacecraft, known in Russia generically as Iskusstvenniy Sputnik Zemli (Artificial Earth Satellite).

Sputniks 1, 2, and 3 were launched during the International Geophysical Year, a period lasting from 1 July 1957 to 31 December 1958. Details of these satellites are given below. The spacecraft known in the West as Sputnik 4, 5, 6, 9, and 10 were announced at the time in Russia as Korabl-Sputnik 1, 2, 3, 4, and 5. These were unmanned test launches of the Vostok space capsule which would eventually carry Yuri Gagarin on his historic flight. Sputnik 7 and 8 were Venus probes.

The first spacecraft to be placed in orbit around the Earth. A basket-ball-sized (59-centimeter) aluminum sphere, weighing 83.6 kg (184 lb), with four trailing spring-loaded antennae, it carried a small radio beacon that beeped at regular intervals and could verify, by telemetry, exact locations on the Earth's surface. It also carried instruments to study the density and temperature of the upper atmosphere and the concentration of electrons in the ionosphere. It circled the Earth about every 90 min in an elliptical orbit that ranged in altitude from about 228 to 947 km (142 to 588 mi). Sputnik 1 remained in orbit, gradually losing altitude, until 4 January 1958, when it disintegrated upon entering the denser portion of the atmosphere.

As a technical achievement, Sputnik caught the world's attention and the American public off-guard. Its size was much more impressive than the intended 7.7-kg (3.5-lb) payload of the American Vanguard satellite. In addition, the public feared that the Soviets' ability to launch satellites also translated into the capability to launch ballistic missiles that could carry nuclear weapons from Europe to the US.

Immediately after the Sputnik 1 launch in October, the US Defense Department responded to the political furor by approving funding for another U.S. satellite project. As a simultaneous alternative to Vanguard, Wernher von Braun and his Army Redstone Arsenal team began work on the Explorer project.

The second artificial satellite and the first to carry a passenger – the dog Laika. Biological data were returned for approximately a week. However, as there was no provision for safe reentry, Laika was put to sleep after a week in space. The satellite itself remained in orbit 162 days.

Sputnik 2 was a 4-m high cone-shaped capsule with a base diameter of 2 m. It contained several compartments for radio transmitters, a telemetry system, a programming unit, a regeneration and temperature control system for the cabin, and scientific instruments. A separate sealed cabin contained the experimental dog Laika. Engineering and biological data were transmitted using the Tral D telemetry system, which would transmit data to Earth for 15 min of each orbit. Two spectrophotometers were on board for measuring solar radiation (ultraviolet and X-ray emissions) and cosmic rays. A television camera was mounted in the passenger compartment to observe Laika.

Sputnik 2 was launched on a Sapwood SS-6 8K71PS launch vehicle (essentially a modified R-7 ICBM similar to that used for Sputnik 1) into a 212 × 1671 km orbit with a period of 103.7 min. After reaching orbit the nose cone was jettisoned successfully but the Blok A core did not separate as planned. This inhibited the operation of the thermal control system. Additionally some of the thermal insulation tore loose so the interior temperatures reached 40°C. It is believed Laika survived for only about two days instead of the planned ten because of the heat. The orbit of Sputnik 2 decayed and it reentered Earth's atmosphere on 14 April 1958 after 162 days in orbit.

The last in the series, though prior to a decision to be more cautious in the launch schedule it may have been intended as the first. Sputnik 3 was an automatic scientific laboratory spacecraft. It was conically-shaped and was 3.57 m long. The scientific instrumentation (twelve instruments) provided data on pressure and composition of the upper atmosphere, concentration of charged particles, photons in cosmic rays, heavy nuclei in cosmic rays, magnetic and electrostatic fields, and meteoric particles. The outer radiation belts of the Earth were detected during the flight. The spacecraft remained in orbit until 6 April 1960.

After orbiting the three successful Sputniks in 1957 and 1958, the Soviets shifted during 1959 to carry out a three-shot exploration of the Moon with Luna 1, 2, and 3. Returning to satellites in 1960, they orbited five Korabl-Sputniks during that and the succeeding year. Each was larger and heavier than the earlier Sputniks, weighing more than 4,500 kg (10,000 lb), and each contained a recoverable re-entry capsule. They served as test vehicles for the manned Vostok spacecraft that followed.