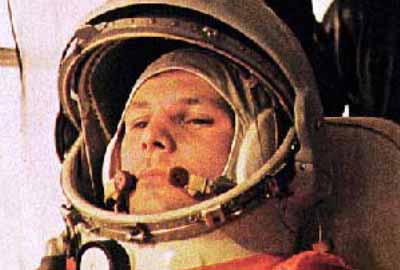 Yuri Gagarin was a Soviet cosmonaut who became the first human to travel in space. The son of a carpenter, Gagarin grew up on a collective farm in the village of Klushino near Gzhatsk (later renamed Gagarin), west of Moscow. He went to college in Saratov, a scientific and industrial city, southeast of Moscow on the Volga river and was also a member of an amateur pilot club in Saratov. After graduating with honors from the Soviet Air Force in 1957, Gagarin was selected as one of 20 fighter pilots to begin cosmonaut training. Immediately before his historic flight, the 27-year-old was promoted from senior lieutenant to major.


The flight of Vostok 1

The flight itself aboard Vostok 1, took place on April 12, 1961. As the rocket blasted off at 09:07 local time, Gagarin reportedly said "Poyekhali", or "here we go". During the 108-min flight, Gagarin was able to eat food through squeeze tubes and kept mission control updated on his condition using a high-frequency radio and a telegraph key. According to a transcript of the communication with ground control, Gagarin was struck by the view through the capsule's window, commenting on our planet's "beautiful aura" and the striking shadows cast by clouds on the Earth's surface.

The return to Earth almost met with disaster, a fact that was kept secret for many years. Cables connecting the spacecraft's capsule to the service module failed to separate before reentry so that Gagarin's capsule was unexpectedly burdened with an extra module as it descended through the atmosphere. The temperature in the capsule became dangerously high and Gagarin was spun around wildly, almost losing consciousness. "I was in a cloud of fire rushing toward Earth," the cosmonaut later recalled. It was 10 minutes before the cables finally burned through and the descent module tore free.

Gagarin bailed out before his capsule hit the ground, parachuting to a safe landing near the village of Uzmoriye on the Volga river, not far from Saratov. In his orange flight-suit he approached a woman and a little girl with a calf, who began to run away (it was only a year since U-2 spy plane pilot Gary Powers had been shot down over Russia). Gagarin called out: "Mother, where are you running? I am not a foreigner." Asked then if he had come from space, he replied, "As a matter of fact, I have!"

Arriving on motorcycles, Uzmoriye villagers purloined the cosmonaut's radio and inflatable rubber dinghy and buried it for safekeeping. "The dinghy was a genuine gift for the village fishermen ... it literally fell down from the sky," Komsomolskaya Pravda reported. But then the KGB appeared on the scene and threatened to arrest the entire community if the equipment was not returned. Despite protests from the villagers that the dinghy was torn, the KGB captain put it in his car anyway and drove off.

About a week after Gagarin's flight, US President John F. Kennedy tasked his Vice-President Lyndon Johnson to report back on the state of the American space program. Johnson warned that urgent action was needed to prevent the Soviet Union leaving the US far behind in space exploration. But with sufficient resources and effort poured into its space program, the US could be first to send a man to the Moon by the late 1960s.

Gagarin was hailed as a hero and given a luxury apartment in Moscow. However, he found all the attention and publicity hard to deal with, and began drinking heavily and sometimes behaving badly. Nevertheless, he was assigned to a second space mission – Soyuz 3, which would involve the first docking between two spacecraft in orbit. On March 27, 1968, he took off on a training flight in a MiG-15 alongside Vladimir Seryogin, a senior test pilot and a decorated military hero. For reasons still not clear, but possibly involving a sudden maneuver to avoid another aircraft, the plane crashed and Gagarin and his copilot were killed. He left a wife, Valentina, and two daughters, and was buried with full honors in the Kremlin wall along with the greatest heroes of the Soviet Union. Statues commemorating Gagarin have been erected in his hometown and in Moscow in the Yuri Gagarin Square. At the spot where he landed after his historic spaceflight a 40-m-tall titanium obelisk has been erected. In addition, a crater on the far side of the Moon has been named after him.