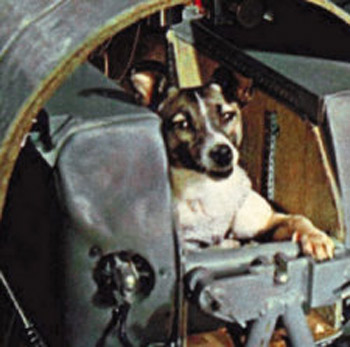 Laika was the first space dog and the first animal of any kind to travel into orbit. Laika ("Barker"), or "Muttnik" as the American press nicknamed her, was a female mongrel (part-Samoyed terrier) stray, rounded up from the streets of Moscow, who flew aboard Sputnik 2. She weighed about 6 kg.

The pressurized cabin on Sputnik 2 allowed enough room for Laika to lie down or stand and was padded. An air regeneration system provided oxygen; food and water were dispensed in a gelatinized form. Laika was fitted with a harness, a bag to collect waste, and electrodes to monitor vital signs. The early telemetry indicated Laika was agitated but eating her food.

No provision was made for her safe return and Soviet authorities claimed that Laika died painlessly after a week in orbit when her air supply ran out. However, new evidence in 2002 revealed that the dog died from over-heating and panic just a few hours after take-off. Four decades after Laika's flight, the Russians unveiled a memorial to her – a plaque at the Moscow research center where she was trained.