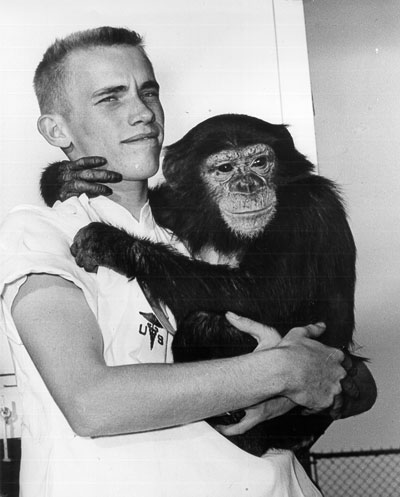 Ham, a 44-month-old male chimpanzee, was the first great ape to travel in space. He was launched on board Mercury Capsule No. 5 at 11:55 am on January 31, 1961, for a suborbital flight. Ham was named for the initials of Holloman Aerospace Medical Center, New Mexico where the space chimps lived and trained, and also after the commander of Holloman Aeromedical Laboratory, Lt. Col. Hamilton Blackshear.

Ham's mission, known as Mercury-Redstone 2 was launched from Pad 5/6 at Cape Canaveral. Because of over-acceleration of the launch vehicle plus the added energy of the escape rocket, a speed of 9,426 km/h was reached instead of the 7,081 km/h planned, resulting in an apogee of 253 km rather than the intended 185 kilometers. This meant that Ham was weightless for 1.7 min longer than the 4.9 min scheduled. He landed 679 km downrange after a 16.5-min flight. His peak reentry g was 14.7 – almost 3g greater than planned. The capsule splashed down about 97 km from the nearest recovery vessel. Tears in the capsule's landing bag capsized the craft, and an open cabin pressure relief valve let still more seawater enter the capsule. When a Navy helicopter finally latched onto and picked up the capsule at 2:52 pm, there was about 360 kg of seawater aboard. After a dangling flight back to the recovery ship, the spacecraft was lowered to the deck and nine minutes later Ham was out. He appeared to be in good condition and readily accepted an apple and half an orange.

Ham's successful flight paved the way for the flight of America's first human astronaut in space, Alan Shepard aboard Freedom 7 atop Mercury-Redstone 3 on May 5, 1961.