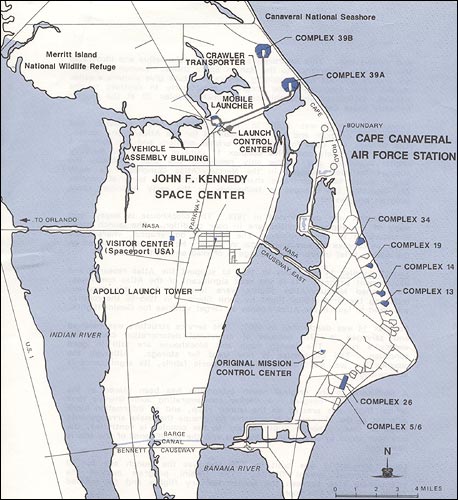 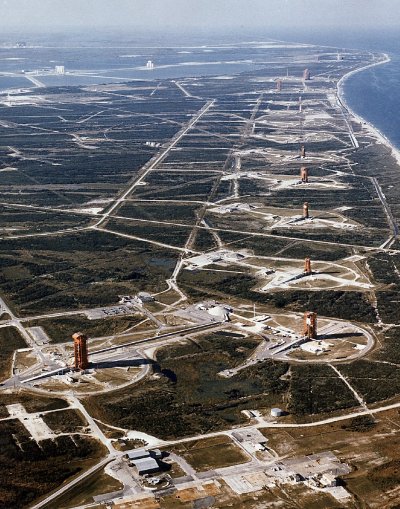 Cape Canaveral is a cape in eastern Florida, located on the Atlantic Ocean at 28.5° N, 80.5° W about 25 km northeast of Cocoa Beach. It is home to America's largest complex of launch pads and support facilities. The northern part of the complex, including Merritt Island, is operated by NASA and known as Kennedy Space Center (KSC). To the south is Cape Canaveral Air Force Station. It is usual to talk about the civilian and military facilities together since NASA and commercial launch companies often use launch pads in the military-run section. In fact, NASA and the Air Force now have a single office at Patrick AFB for dealing with launch customers. They also recently agreed to share police and fire departments, and other functions, which in the past were duplicated. Efforts continue to unite the military, civilian, and commercial facilities at Cape Canaveral into a single 'spaceport'.

Cape Kennedy is the name by which Cape Canaveral was known between 1963 and 1973. President Lyndon Johnson authorized the change in Nov 1963 following the assassination of President Kennedy. At the request of Floridians the Cape's original name was restored a decade later, although NASA's facility continues to be known as the Kennedy Space Center.

Cape Canaveral was chosen as a missile launch site soon after World War II when it became clear that new rockets were becoming too powerful for inland facilities such as that at White Sands, New Mexico. The Cape had good weather, the Atlantic to the east over which missiles could be fired without risk to human populations, and a string of islands on which tracking stations could be set up. In the late 1940s, Patrick Air Force Base was established as a launch command center and, shortly after, acquired more than 4,500 ha of land from the state of Florida to use as its new proving ground. To the east extended the Eastern Test Range across which missiles, and eventually space vehicles, could be launched safely and tracked for thousands of kilometers. The first launch from Cape Canaveral was of a Bumper WAC in July 1950. Swiftly this was followed by many more test flights of the Navaho, Snark, and Matador guided missiles, and of the Redstone and Jupiter C ballistic missiles. As America's seminal space program began to take shape, Cape Canaveral was the obvious choice as a launch site. Not only were the launch and tracking facilities already in place but the Cape's location not far from the equator meant that rockets heading eastward for orbit could take advantage of the extra velocity imparted to them by Earth's rotation.

Since 1950, more than 40 launch complexes have been constructed at the Cape, many of them now obsolete or dismantled. At the southern end are pads used to test fire Trident and Minuteman missiles, and small- and medium-sized unmanned space launchers such as Scout, Delta, and Atlas-Centaur. Toward the center of the site is "ICBM row" – a chain of a dozen or so major pads used for Redstone, Atlas, and Titan launches, including those of the manned Mercury and Gemini flights. At the northern end of ICBM row are Complex 37, used for the Saturn Is, and Complex 34, the site of the Apollo 1 fire in which three astronauts died. These all lie within Cape Canaveral Air Force Station. Still further north is Launch Complex 41, just within the border of the Air Force Station, and the Complexes 40 and 39, within Kennedy Space Center. These three Complexes are used to launch the largest American rockets and operate differently than the smaller pads to the south. Instead of each rocket being assembled and tested on the pad, it is put together and checked inside special buildings and then moved to the pad as the launch day approaches. The cores of Titan IIIs and IVs are assembled in the Vertical Integration Building, then moved on rail tracks to another building where their solid boosters are attached, and finally transported to either Launch Complex 40 or 41 prior to liftoff.

Launch Complex 39, the most northerly at the Cape, includes two launch pads, 39A and 39B, which were used by Saturn Vs during the Apollo program. Today they are the points of departure for the Space Shuttle which is put together in the Vertical Assembly Building then moved to its pad by a crawler-transporter a few weeks before launch. Other specialized buildings at KSC are used to check the Shuttle after its return from orbit and to prepare its payloads. A 4,500-m runway several kilometers to the west of Complex 39A enables the Shuttle to return directly to the Cape after each mission.