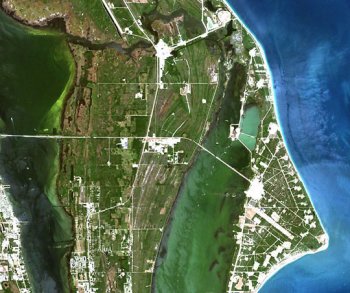 John F. Kennedy Space Center (KSC) is the United States's primary civilian space launch facility and only launch complex for manned operations. It is operated by NASA and located at Cape Canaveral on Florida's Atlantic coast. Kennedy Space Center is 55 km (34 mi) long from north to south, and 16 km (10 mi) across at its widest point. All Space Shuttle launches and many unmanned launches have taken place from here.

Selection of the site was influenced by the fact that the Missile Firing Laboratory had been launching missiles from Cape Canaveral since 1953. Originally called the Launch Operations Center, the facility was renamed the John F. Kennedy Space Center in 1963.

On 29 July 1958, President Dwight D. Eisenhower signed Public Law 85-568 that established the National Aeronautics and Space Administration (NASA). Dr. T. Keith Glennan was sworn in as the first administrator of NASA on August 19, and on Ocobert 1, the new agency began operation with the mission to perform civilian research related to space flight and aeronautics.

On 1 September 1961, NASA requested appropriations for initial land purchases on Merritt Island to support the Apollo Lunar Landing Program. This land would eventually become the Kennedy Space Center (KSC) we know today. The first request was for a 200-square-mi area immediately north and west of existing Cape Canaveral launch pads. On 7 March 1962 the Launch Operations Center (LOC) was established as an independent NASA field center located on Merritt Island. In November 1963, President Lyndon Johnson designated the facilities of the Launch Operations Center and Station No. 1 of the Atlantic Missile Range (now known as the Eastern Test Range) as the John F. Kennedy Space Center. The Air Force subsequently changed the name of the Cape Canaveral Missile Test Annex to Cape Kennedy Air Force Station.

KSC first began making its mark on the Merritt Island side of the Banana River after acquiring property there in the early 1960s. Designers quickly began developing plans for Launch Complex 39 facilities which include the Launch Control Center, Pads A and B as well as the huge hangar now known as the Vehicle Assembly Building (VAB). The NASA KSC Headquarters building, located in the industrial area, was formally opened on 26 May 1965. Headquarters is the administrative center for all spaceport activities, including the center director's office. In February 1964, construction on the Central Instrumentation Facility (CIF) began. The CIF is the core of instrumentation and data processing operations at KSC, which includes offices, laboratories and test stations. Formerly known as the Manned Spacecraft Operations Building, the Operations and Checkout Building (O&C) was opened during the fall of 1964 and was used to test Apollo spacecraft, both the Command and Lunar Modules. With the start of shuttle operations, it was utilized to process and integrate shuttle experiments and payloads.

The well thought-out designs of the Cape Canaveral Spaceport have stood the test of time. The story starts with the first basic structures where early NASA program teams were housed on Air Force property at Cape Canaveral. For example, Hangar S, built in the 1950s for the Vanguard program at what is now Cape Canaveral Air Force Station (CCAFS), was used by NASA for Mercury and Gemini and then for its unmanned space program. It is now a Shuttle operations training facility. The nearby Spacecraft Assembly and Checkout Building (formerly Hangar AE) is home to KSC's Expendable Launch Vehicle (ELV) Program's upgraded Launch Vehicle Data Center. The Center allows engineers to monitor voice, data and video systems that support ELV missions.

Hangar AE was originally built for a DoD missile program. The facility was acquired in 1960 by NASA and modified for unmanned missions. The adjacent E&O (Engineering and Operations) Building, originally built for NASA's Mercury program later housed Unmanned Launch Operations. It recently was renovated for KSC's ELV Program. Nearby, the E&L (Engineering and Laboratory) Building, built in 1950s by the DoD, was temporarily used for the offices of Center Director Dr. Kurt H. Debus and his associates before the construction of NASA KSC Headquarters. E&L now houses the new Cape Canaveral Spaceport Planning and Customer Service Center, which provides a one-stop shop for new customers' needs.

In recent years CCAFS and KSC have been jointly referred to as the Cape Canaveral Spaceport. The name reflects a growing partnership between KSC and the 45th Space Wing and a vision for the future of Florida's Space Coast.

NASA's John F. Kennedy Space Center has played a pivotal role in NASA's mission, having been the departure site for the first human journey to the moon; the starting point for hundreds of scientific, commercial, and applications spacecraft; and as the base for Space Shuttle launch and landing operations.