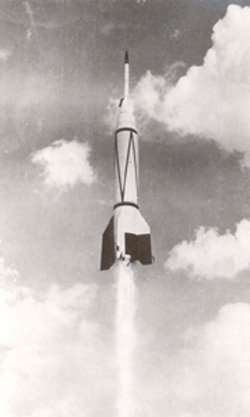 Flight No. 6 in the Bumper series. In this flight from White Sands in April 1949, the V-2 propulsion was prematurely cut off, resulting in a maximum altitude of only 31 miles. Credit: US Army.

Bumper WAC was the world's first two-stage liquid-propellant rocket and the first human-made object to achieve hypersonic speeds. Bumper WAC was a 19-m-long, 1.9-m-diameter marriage of the German V-2 and the liquid-propellant stage of the United States Army WAC Corporal. The WAC Corporal remained atop the nose of the V-2 for the first minute of flight. Then the V-2 shut down, having provided a high altitude "bump" for the second stage.

The idea for the vehicle, capable of testing two-stage technology, reaching higher altitudes than ever before, and carrying out new upper atmosphere research, was put forward in July 1946 by Holger N. Toftoy, then Colonel, chief of the Research and Development Division, Office of the Chief of Ordnance. On 20 June 1947, the Bumper Program was inaugurated with overall responsibility being given to the General Electric Company as part of the Hermes program. JPL (Jet Propulsion Laboratory) carried out the necessary theoretical investigations, design of the second stage, and basic design of the separation system. The Douglas Aircraft Company was assigned responsibility for detail design, building the second stage, and making the special V-2 parts required. In the final design, the powder rocket booster normally used to launch the WAC Corporal was dispensed with. This was in order to limit the size of the combination missile and allow the smaller rocket to fit as deeply as possible into the V-2, yet retain enough space in the instrument compartment of the V-2 for housing the guidance equipment. Also fitted within the instrument section were the guide-rails and expulsion cylinders used as a launcher for the WAC Corporal.

Eight Bumper-WACs were built. The first six were launched from the White Sands Proving Ground starting on 13 May 1948, and the last two from Cape Canaveral (the first flights from the fledgling missile testing grounds). Flight 5, on 24 February 1949, was the only complete success, reaching an altitude of 244 mi (390 km), a record that stood until 1957, and a velocity of 5,150 mph. Although the missile was tracked by radar for most of its flight, more than a year passed before the smashed body section was located. Flights 7 and 8 were significant for being launched from what was then called the Long-Range Proving Ground at Cape Canaveral, The purpose of both flights was to determine the aerodynamic characteristics of high-speed missiles flying shallow trajectories. No. 7 hit 200 miles from the coast after breaking all speed records within the atmosphere (No. 5 had hit its top speed in space). The program was officially concluded in July 1950.