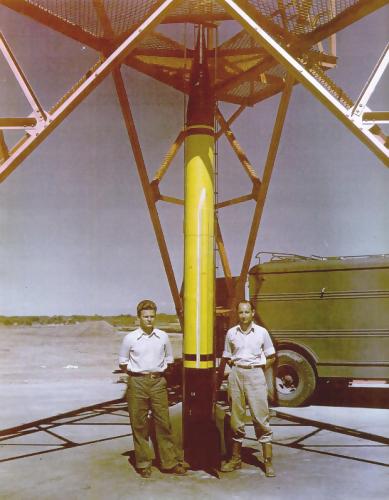 The first "all-up" WAC (i.e., full-scale operational WAC Corporal plus booster) was launched at the White Sands Proving Ground on October 11, 1945, and reached an altitude of about 70 km. Improved versions of the rocket climbed to 100 km. Mated to the V-2, the WAC Corporal served as the upper stage of the Bumper-WAC, the world's first two-stage rocket. The name Corporal derived from the fact that it came after the Private rocket program; WAC stood for "Without Any Control". Later versions of the Corporal missile were equipped with a guidance mechanism.

Begun as a meteorological rocket to meet Army Signal Corps requirements, the WAC Corporal was about 5 m (16 ft) long, had an Aerojet liquid-propellant motor, weighed about 320 kg (700 lb) at launch, and could carry about 11 kg (25 lb) of payload to 64 km (40 miles). This performance could hardly match the 900-kg (1-ton) V-2 payloads, but the WAC Corporal was cheap to make and easy to use.

WAC Corporal studies commenced in December 1944 at the ORDCIT project. Rather than test the results of their studies out on a full-scale WAC Corporal, JPL engineers first built a one-fifth-scale model called the Baby WAC. Live tests of the Baby Wac were carried out at the GALCIT Goldstone Range, July 3 to 5, 1945. The choices of three fins and the rocket booster were confirmed.

The first WAC Corporal test launches, which involved the Tiny Tim booster plus subscale or dummy WAC Corporals, started at White Sands on September 26, 1945, well before the first V-2s were fired in the United States. Thus, the WAC Corporal is often designated as the first true sounding rocket, despite the fact that other rockets had previously carried scientific instruments and despite the fact that it was the direct progeny of the military Corporal missile. Radar tracking showed that the first "all-up" WAC Corporal reached an altitude of 70 km (43.5 miles), about twice the height originally planned. This increase was ascribed to design improvements and the substitution of the more powerful Tiny Tim solid-propellant booster for that originally selected.

Although the WAC Corporal payloads were rather small, the rocket could be produced quickly and in quantity. There is no doubt that it would have been used extensively in the middle and late 1940s had not the windfall V-2s become available. As it turned out, the major contribution of the WAC Corporal to sounding rocket technology was its role in the evolution of the famous Aerobee series.