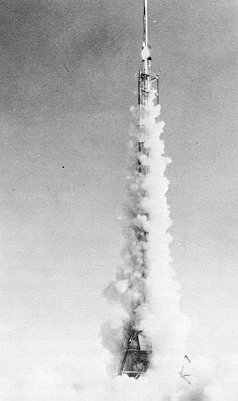 The Aerobee was an early sounding rocket that was essentially a larger, upgraded version of the WAC Corporal. It was one of two rockets developed by the United States Navy in the 1940s – the other being the Viking – to loft scientific instruments into the upper atmosphere.

An unguided, two-stage vehicle, the Aerobee was launched by a solid-propellant booster of 80,000-newton (N) thrust that burned for two and a half seconds. After the booster was spent, the rocket continued upward, propelled by a liquid-fueled sustainer engine of 18,000-N thrust. Its fins were preset to give a slight spin to provide aerodynamic stability during flight. Rockets in the Aerobee family were 7.6–17.4 m long and carried payloads of 90–360 kg to altitudes of 160–560 km. Between 1947 and 1985, hundreds of Aerobees of different designs were launched, mostly from the White Sands Missile Range, for both military and civilian purposes.

On May 22, 1952, in one of the earliest American physiological experiments on the road to manned spaceflight, two Philippine monkeys, Patricia and Mike, were enclosed in an Aerobee nose section at Holloman Air Force Base, New Mexico. Patricia was placed in a sitting position and Mike in a prone position to test the effects on them of high acceleration. Reaching a speed of 3,200 km/h and an altitude of 58 km, these monkeys were the first primates to travel so high. Two white mice, Mildred and Albert, also rode in the Aerobee nose inside a slowly rotating drum in which they could float during the period of weightlessness. The section containing the animals was recovered safely by parachute. Patricia died of natural causes about two years later and Mike in 1967, both at the National Zoological Park in Washington, DC.

From an agency standpoint, the Aerobee is a hybrid resulting from Navy development funds and Army technology (the WAC Corporal). In 1946, the scientific drawbacks of the V-2 were generally well known, as was the fact that the extant WAC Corporal was too small for much of the anticipated space research. The Aerobee program had its genesis when Merle A. Tuve and Henry H. Porter, of the Applied Physics Laboratory (APL) of the Johns Hopkins University, suggested to James A. Van Allen that he survey the rockets available for scientific research within the United States. An important event during Van Allen's survey was the visit to APL by Rolf Sabersky of Aerojet Engineering Corp., the manufacturers (along with Douglas Aircraft Co.) of the WAC Corporal, in early Jan 1946.

Van Allen's conclusions were submitted to Tuve (then Director of APL) on May 15 in a memo entitled "Liquid Powered Sounding Rockets for High Atmospheric Studies." Essentially, Van Allen's conclusions were that no fully satisfactory sounding rockets existed and that APL should act as an agent for the Navy Bureau of Ordnance in the development and procurement of new scientific sounding rockets. Also on Jan 15, APL directed a letter to Aerojet requesting a detailed proposal for the delivery of 20 sounding rockets capable of carrying 68 kg (150 lb) to 60,960 m (200,000 ft). Following a conference at APL on Feb 2, Aerojet submitted a letter proposal on Feb 22 bearing the lengthy title: "Proposal to Develop Sounding Rockets Capable of Attaining Altitudes in Excess of 600,000 Feet [182,880 m] and Carry a Payload from 300 to 1,500 lb (136 to 680 kg]) This to Include Liquid Rocket Motor and Fuel Development and Also to Develop Efficient High Thrust Launching Rockets."

Meanwhile the Naval Research Laboratory, which had provided many experiments for the V-2s, was consulted. On Mar 1, 1946, Van Allen recommended that the Navy Bureau of Ordnance negotiate a contract with Aerojet for the procurement of 20 liquid-propellant sounding rockets, 15 of which would go to APL and 5 to NRL. The contract was formally awarded to Aerojet on May 17 for 20 XASR-1 sounding rockets. The rocket performance stipulated was the delivery of 68 kg (150 lb) of payload to over 91,440 m (300,000 ft). Obviously, the Aerobee would have to be considerably larger than the WAC Corporal. At APL, which was assigned the task of technical direction by the Navy. Van Allen took charge of the Aerobee program.

The Aerobee industrial team was essentially the same as that which built the WAC Corporal. Aerojet Engineering 27 was the prime contractor while Douglas Aircraft Co. performed aerodynamic engineering and some manufacturing. The original Aerobee was about 6 m (19 ft) long and weighed roughly 725 kg (1600 lb). It featured the same propellants as the WAC Corporal (furfuryl alcohol and red fuming nitric acid) and a 1.8-meter (6-foot) solid-propellant booster that accelerated the basic vehicle to about 300 m/s (1,000 ft/s) before dropping off.

The first Aerobee test took place at White Sands on Sep 25, 1947, when a dummy Aerobee was launched with a live booster to check out stage separation. Two similar tests followed in October. Then, on Nov 24, 1947, the first full-scale Aerobee was launched. Although the flight had to be terminated after 35 sec because of excessive yaw, so many subsequent flights were successful that the rocket was soon renowned for its reliability – particularly in comparison with the V-2. Orders for more Aerobees from Government agencies began to arrive at Aerojet. Aerojet has made various versions of the Aerobee ever since.

Some 40 of the original Aerobee design (XASR-1) were fired before this sounding rocket was supplanted by an improved model termed the "Aerobee-Hi" and, after further improvements, the Aerobee 150. There were actually two Aerobee-Hi's: the Air Force version (Air Force-Hi) and the Navy version (Navy-Hi) as well as some interim and "standard" models. The Aerobee-Hi's were born when the Navy and Air Force were approached by Aerojet in 1952 on the subject of an improved Aerobee – a rocket capable of lifting 68 kg (150 lb) to about 240 km (150 miles). Aerojet received an Air Force contract in 1952 and another from the Navy in 1953. The fundamental difference between the Aerobee-Hi and the original Aerobee – whose thrust had been upgraded from 1,179 to about 1,800 kg (from 2,600 to about 4,000 lb) – was the propellant capacity. Beyond this, the Air Force and Navy each had its own modifications of the basic vehicle. The first Air Force-Hi rose from Holloman Air Development Command in New Mexico on Apr 21, 1955. It carried a payload of 97.5 kg (215 lb) to 198.0 km (123 miles). The first Navy launch occurred at White Sands on Aug 25, 1955, but the test rocket attained scarcely more than 3-km (2-mile) altitude when the main Aerobee engine failed to ignite. Despite the initial difficulties the Navy experienced, the Aerobee-Hi soon proved as reliable as its predecessor and replaced the original Aerobee as the workhorse of space research.