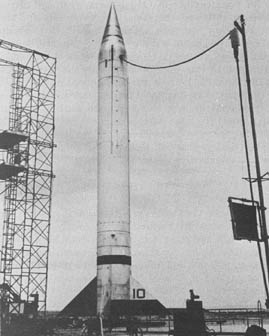 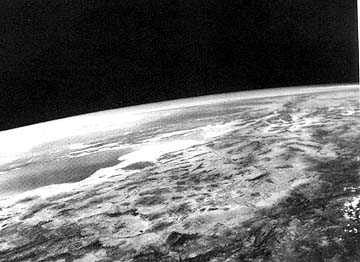 Photo taken during a Viking flight in 1950, looking across Arizona and the Gulf of California to the curving horizon of Earth.

Viking was a United States Navy-developed rocket that formed the basis of the Vanguard launch vehicle. Viking started out as a sounding rocket program in 1946 led by Ernst Krause and Milton Rosen and drawing initially upon V-2 technology. From 1949 through 1957, 14 Vikings were built to test innovative features in control, structure, and propulsion, and to launch increasingly large instrument payloads. No two Vikings were identical. The Navy used the rockets to probe the region of the upper atmosphere that affects long-range radio communication and also to examine their potential as a tactical ballistic missile.

When deciding which of several options, including the Atlas and the Jupiter C, to use for launching its first artificial satellite, the American government chose the Navy Viking-based Vanguard.


History of the Viking rocket

Back in December 1945 when the NRL Rocket-Sonde Research Branch was taking its first steps, the engineers in this embryonic organization had planned to build their own research rockets. The availability of the V-2s only delayed these plans. At the beginning of their search for the best rocket, NRL engineers C. H. Smith and Milton Rosen set a performance goal of 227 kg (500 lb) of payload at roughly 160 km (100 mi). They reasoned that some experimenters might be satisfied with the 45-kg (100-lb) payloads of the Aerobees then under development but that others needed something closer to the V-2 ton-size payloads. The rocket design finally selected was therefore much larger than the Aerobees on the drawing boards and understandably bore considerable resemblance to the V-2. Originally, this big rocket was called the Neptune; the name it is now remembered by is the Viking.

While the Aerobee received its technical direction from APL (the Laboratory was supported largely by Navy funds), NRL took charge of the Viking. The Navy was the key Government agency in sounding rocket development, although the Army and Air Force did play their roles, as mentioned in connection with the Wac Corporal and Aerobee-Hi. The two major contractors on the Viking were Glenn L. Martin Co., which won the competition for the prime contract in August 1946, and Reaction Motors, Inc., which built the rocket engine under a separate contract from the Navy's Bureau of Aeronautics.33 Program direction at NRL was originally by C. H. Smith, under E. H. Krause; but in the fall of 1947, both Krause and Smith left to work on another project. Their places were taken by Homer E. Newell, Jr., and Milton W. Rosen, respectively.

The original Martin contract called for 10 Vikings. Altogether, 14 were built, with the last 2 assigned to tests in the Vanguard Earth-satellite program. There were many minor variations from vehicle to vehicle, but two major varieties are recognized: the type 7 and the type 9 Vikings. All rockets of type 7 were about 15 m (49 ft) high and weighed about 4500 kg (almost 5 tons) loaded. In contrast, the type 9 Viking was shorter (about 13 m (42 ft)) and much squatter; it was 50% heavier and could carry 450 kilograms (1000 lb) to 254 km (158 mi). In fact, the type 9 Viking looked less like a sounding rocket and more like a military missile. At one time, thought was actually given to converting the Viking to a submarine-launched missile.

Viking 1 was fired from White Sands on May 3, 1949; the 12th, the last of the sounding rockets, left its launch pad on February 4, 1955. Two particularly interesting launches were Viking 4, which was fired from the deck of the USS Norton Sound in the Pacific (Project Reach) and Viking 8, which broke away from its moorings during a supposed static test firing on June 6, 1952. It landed on the desert 8 km (5 mi) away.

The Vikings transported a great many experiments into the upper atmosphere and above – 254.3 km (158 mi) up for Viking 11 on May 24, 1954. They also took impressive high-altitude photographs of the Earth. But the Viking was too expensive and required too many ground personnel and facilities to make a practical sounding rocket. The most significant contributions from the Viking program were in technology. The Viking pioneered the gimbaled engine and paved the way for the Vanguard program with its first-stage powerplant.