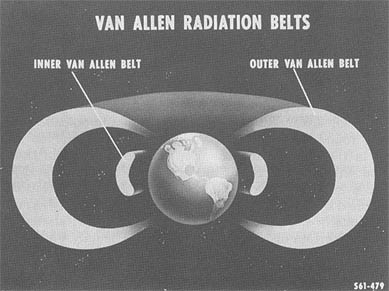 James Van Allen was an American space scientist who contributed to 24 satellite and space probe missions, including some of the early Explorers and Pioneers 10 and 11. His research focused on planetary magnetospheres and the solar wind. He began high-altitude rocket research in 1945, initially used captured V-2s, and is best remembered for his discovery of the radiation belts that were subsequently named after him (see below).

Van Allen received a BS from Iowa Wesleyan College in 1935, and a MS (1936) and PhD (1939) from the California Institute of Technology. After a spell with the Department of Terrestrial Magnetism at the Carnegie Institution of Washington, where he studied photodisintegration, Van Allen moved in 1942 to the Applied Physics Laboratory at The Johns Hopkins University where he worked to develop a rugged vacuum tube. He also helped to develop proximity fuses for weapons used in World War II, especially for torpedoes used by the United States Navy. By the fall of 1942, he had been commissioned as an officer in the Navy and was sent to the Pacific to field test and complete operational requirements for the proximity fuses.

After the War, Van Allen returned to civilian life and began working in high altitude research, first for the Applied Physics Laboratory and, after 1950, at the University of Iowa. Van Allen's career took an important turn in 1955 when he and several other American scientists developed proposals for the launch of a scientific satellite as part of the research program conducted during the International Geophysical Year (IGY) of 1957–58. After the success of the Soviet Union with Sputnik 1, Van Allen's Explorer spacecraft was approved for launch on a Redstone rocket. It flew on January 31,1958, and returned enormously important scientific data about the radiation belts circling the Earth. Van Allen became a celebrity because of the success of that mission, and went on to other important scientific projects in space. In various ways, he was involved in the first four Explorer probes, the first Pioneers, several Mariner projects and the Orbiting Geophysical Observatory.

Van Allen retired from the University of Iowa in 1985 to become Carver Professor of Physics, Emeritus, after having served as the head of the Department of Physics and Astronomy from 1951.

The Van Allen belts are two doughnut-shaped belts of high-energy charged particles trapped in Earth's magnetic field. They were discovered in 1958 by James Van Allen based on measurements made by the Explorer 1 satellite. The inner Van Allen Belt lies about 9,400 km (1.5 Earth radii) above the equator, and contains protons and electrons from both the solar wind and Earth's ionosphere. The outer belt is about three times further away and contains mainly electrons from the solar wind.