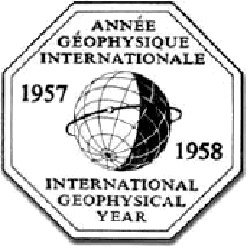 The International Geophysical Year (IGY) was a comprehensive series of global geophysical activities spanning the period from July 1957 to December 1958 and timed to coincide with the high point of the 11-year cycle of sunspot activity. It was proposed by the International Council of Scientific Unions (ICSU) in 1952 following a suggestion by Lloyd Berkner. In March 1953, the National Academy of Science appointed a United States National Committee to oversee American participation in the IGY. The American program included investigations of aurora and airglow, cosmic rays, geomagnetism, glaciology, gravity, the ionosphere, determinations of longitude and latitude, meteorology, oceanography, seismology, solar activity, and the upper atmosphere. In connection with upper atmosphere research, the United States undertook to develop an orbiting satellite program. It was from the IGY rocket and satellite research that the United States developed its space program.