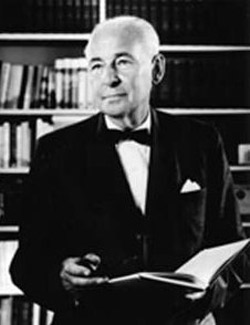 Lloyd Berkner was an American physicist and engineer who first measured the extent, including height and density, of the ionosphere, leading to a complete understanding of radio wave propagation. Later as a science administrator, he became an influential figure in shaping American space policy in the 1950s and 1960s.

Berkner received a BS in electrical engineering from the University of Minnesota and later attended George Washington University. Early in his career, he worked on radio navigation beacons for the Airways division of the Bureau of Lighthouses (1927–28), as radio engineer on the Byrd Antarctic expedition (1928–30). Returning to the US Bureau of Standards (1930–33) he studied the ionosphere using radio-pulse transmissions, then terrestrial magnetism with the Carnegie Institution (1933–51). During World War II, he helped develop radar systems, especially the Distant Early Warning system.

Berkner rose to prominence as a science administrator following the War. He played a central role in the exchange of scientific information during the International Geophysical Year and subsequently help formulate America’s response to the launch of Sputnik 1.

From 1951 to 1960, Berkner served as the head of Associated Universities, Inc., charged with running the Brookhaven Laboratories for the Atomic Energy Commission. In 1961, he became president of the Graduate Research Center of the Southwest, and four years later was named director. He also served as Acting Director of the National Radio Astronomy Observatory in Green Bank and chairman of the National Academy of Science's Space Science Board in the 1960s. It was Berkner who gave Frank Drake approval to use the facilities at Green Bank to conduct Project Ozma. Shortly after, Otto Struve took over as Green Bank's Director. Berkner died less than a year after receiving the NASA Distinguished Public Service Medal for his pioneering work in the advancement of space science.