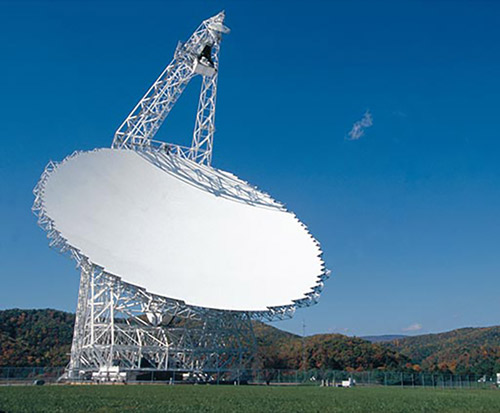 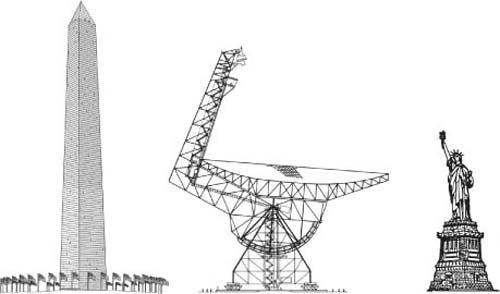 Fig 2. The Green Bank Telescope compared to the Washington Monument and Statue of Liberty.

Green Bank Observatory, in West Virginia, is the site of a number of radio telescopes, including the giant Robert C. Byrd Green Bank Telescope. Previously a facility run by the National Radio Astronomy Observatory, Green Bank has been operated by a private organization since October 2016, following cessation of NSF funding.

Instruments located here besides the Green Bank Telescope include: a 140-ft (91-m) radio telescope on a polar-aligned mounting, the 85-ft (26-m) Howard E. Tatel telescope, used by Frank Drake in Project Ozma, and a variety of smaller radio telescopes. Other SETI programs, using the 140-ft dish, were led by Gerrit Verschuur (1972), Benjamin Zuckerman, and Patrick Palmer (1972 and onward), and David Black, Jill Tarter, and colleagues (1977).

The Green Bank conference (1961) was an informal, private gathering convened by the Space Science Board, at Green Bank in Nov 1961, on the subject of 'Intelligent Extraterrestrial Life'. Following the publication of Cocconi and Morrison's seminal paper on SETI and Drake's pioneering Project Ozma, the aim was, in the words of the conference organizer J. P. T. Pearman:

... to examine, in the light of present knowledge, the prospects for the existence of other societies in the galaxy with whom communications might be possible; to attempt an estimate of their number; to consider some of the technical problems involved in the establishment of communication; and to examine ways in which our understanding of the problem might be improved.

In addition to Pearman, the attendees were Dana Atchley, Melvin Calvin, Frank Drake, Su-Shu Huang, John Lilly, Philip Morrison, Bernard Oliver, Carl Sagan, and Otto Struve. The group whimsically constituted itself "The Order of the Dolphin" because of Lilly's work on dolphin communication (see dolphins, as a form of alien intelligence). Subsequently, Calvin had buttons made showing a dolphin emblem from an ancient Greek coin and sent one to each participant. During the conference, Calvin was awarded the Nobel Prize in Chemistry, an event anticipated by Pearman who had smuggled in three celebratory bottles of champagne. Drake presented the now-famous Drake Equation in an effort to formulate mathematically the conference's central problem. During each session, a different factor of the equation was discussed.