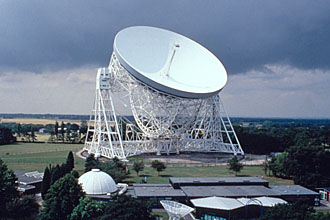 A radio telescope is an instrument designed to collect and focus radio waves arriving at Earth from space. Its principle of operation is broadly similar to that of an optical telescope, the major practical differences being forced by the fact that radio waves are much longer than waves of visible light. Since resolving power decreases as wavelength increases, very large instruments are needed to provide useful information about the structure of radio sources. Indeed, to distinguish the same level of detail in a source emitting 21-cm radio waves as can be achieved by a large optical telescope, a radio dish would need a diameter of about 100 km (60 miles). In practice, fully steerable dishes are limited by weight considerations to about 100 m (300 ft) across. Fixed dishes, such as that of the Arecibo Observatory, may be considerably larger. However, to achieve much higher levels of resolution, arrays of separate instruments are linked to form radio interferometers.