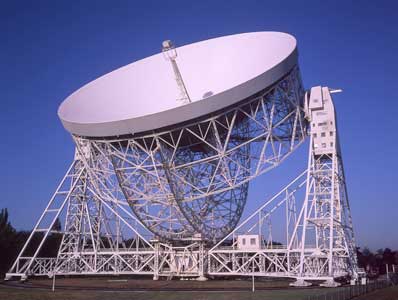 The Lovell Telescope, originally known as the Mark I, and later the Mark IA, is the main instrument at the University of Manchester's radio astronomy facility at Jodrell Bank in Cheshire, England. With a dish diameter of 76 meters (250 feet), it is the world's third largest fully steerable radio telescope and has been in operation since 1957. Named after Bernard Lovell, through whose efforts it was built, it is employed principally for astrophysical research, especially pulsar observations. However, since mid-1998 it has also been used in conjunction with the Arecibo radio telescope as part of Project Phoenix (see SETI). In addition to its use as a single telescope, the Lovell Telescope is a key element of the UK's MERLIN high-resolution radio-imaging National Facility. The Lovell Telescope is also regularly linked to telescopes in Europe and around the globe to make observations with the highest resolution in all astronomy.

With a much more accurate pointing system, completed in 2002 as part of the latest series of upgrades, the telescope is now performing better than at any time in its 45-year life. The summer of 2003 will bring the final phase of the upgrade in which each of the 340 panels that make up the instrument's collecting and focussing surface will be adjusted to make the whole surface follow the optimum parabolic shape to an accuracy of between 1 and 2 millimeters. When this final task is completed, the telescope will have its frequency range quadrupled so allowing a wide range of new science to be carried out. The upgrade will also more than double the sensitivity of MERLIN and open up new areas of astrophysical study and producing images whose detail exceeds that of the Hubble Space Telescope.