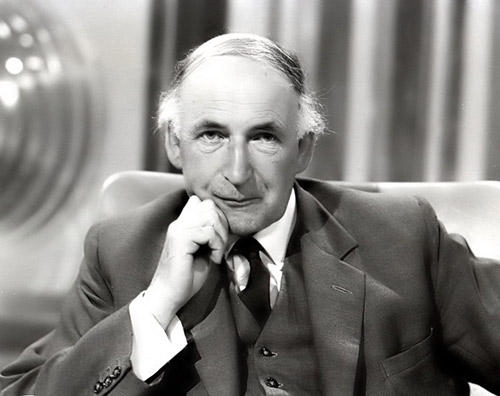 Bernard Lovell was an English radio astronomer and physicist, who was the driving force behind the world's first giant radio telescope. Before World War II, he studied cosmic rays with P. M. Blackett and during World War II he did radar research. After the war, with the help of James Hey he was able to procure an ex-Army mobile radar unit operating at a wavelength of 4.2 m. After finding that the electric trams at Manchester caused too much interference, he transported the van to Jodrell Bank on the Cheshire plain, where he used it to study transient radar echoes. His goal was to study cosmic-ray showers using radar, but instead he found that the echoes came from ionized meteor trails. With Clegg, he built a 218-ft transit telescope (the 'wire bowl'), with which Robert Hanbury Brown and Cyril Hazard found that the Andromeda Galaxy was a radio source. Pursuing his dream of a large steerable telescope, Lovell supervised construction of the Mark 1 Jodrell Bank telescope (now named after him).

Lovell was the author of many popular books, including In the Center of Immensities, and the textbook Radio Astronomy, which he coauthored with Clegg.

An early skeptic of SETI, he responded coolly to a letter from Cocconi, dated Jun 29, 1959, proposing the use of the Jodrell Bank dish to search for interstellar signals.1 However, he changed his views to the extent that on Mar 22, 1962, he was able to tell congressman Emilio Daddario that "now one has to be sympathetic about an idea which only a few years ago would have seemed rather farfetched."2