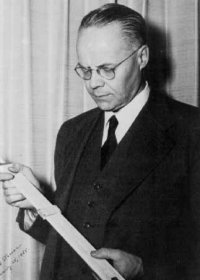 Otto Struve was the last of four famous Struve astronomers and grandson of Otto Wilhem Struve. He made detailed spectroscopic investigations of stars, especially close binaries, the interstellar medium, where he discovered H II regions, and gaseous nebulae.1 Otto Struve may also be regarded as the father of modern SETI. He was one of the few eminent astronomers in the pre-Space Age era to publicly express a belief that extraterrestrial intelligence was abundant.

Struve's education at the University of Kharkov was interrupted by World War I and the Russian Civil War, which left him a refugee in Turkey. He emigrated to the United States in 1921, obtained a PhD from the University of Chicago and eventually became head of the astronomy department there. In 1932, he was made joint director of the University's Yerkes Observatory and McDonald Observatory (which he founded and where a telescope is named after him). In 1950, he moved to the University of California, Berkeley, and in 1959 became the first regular director of the National Radio Astronomy Observatory at Green Bank. Struve's belief in the widespread existence of life and intelligence in the Universe stemmed from his studies of slow-rotating stars. Many stars, including the Sun, spin at a much lower rate than was predicted by contemporary theories of early stellar evolution. The reason for this, claimed Struve, was that they were surrounded by planetary systems which had carried away much of the stars' original angular momentum. So numerous were the slow-spinning stars that Struve estimated, in 1960, there might be as many as 50 billion planets in our Galaxy alone. As to how many might harbor intelligent life, he wrote:2

An intrinsically improbable event may become highly probable if the number of events is very great. ... [I]t is probable that a good many of the billions of planets in the Milky Way support intelligent forms of life. To me this conclusion is of great philosophical interest. I believe that science has reached the point where it is necessary to take into account the action of intelligent beings, in addition to the classical laws of physics.

Having become director of the Green Bank observatory during the time that preparations were being made for Project Ozma, Struve enthusiastically endorsed and publicized Frank Drake's pioneering work. He thus helped, from the outset, to give legitimacy and respectability to the SETI enterprise. Prior to this, through his lectures and discussions at Berkeley and Cornell University, he helped inspire a number of key researchers, including Drake himself and Ronald Bracewell, whom he invited to Berkeley in 1954.