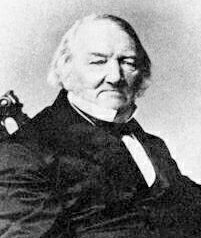 Otto Wilhelm Struve was a Russian-born German astronomer, son of Friedrich G. W. Struve, who accurately determined the rate of change of precession and estimated the velocity of Sun from the proper motions of nearby stars. He worked at Pulkovo Observatory, where he collaborated with his father in the search for double stars, and served as director from 1862 to 1899.

His grandson, also called Otto (go here) was director (1932–47) of the Yerkes Observatory and professor of astrophysics at the University of California (1950–59). He made important discoveries in the fields of stellar evolution and radial velocities.

Struve's Lost Nebula was nebulosity reported by Otto Struve in 1868, and verified by Heinrich d'Arrest, in the vicinity of Hind's Variable Nebula (NGC 1555) in Taurus. Although given a separate catalogue number (NGC 1554) by Dreyer, it was not seen by observers a decade after Struve's discovery, nor has it been seen since. Modern sources, such as Sky Catalogue 2000.0 group NGC 1554 and NGC 1555 together as a single object, although 1554 is not visible on the Palomar Sky Survey plates. At the reported position of the Lost Nebula is a magnitude 14 star, 4' west-southwest of T Tauri. It appears that the Lost Nebula may have been a transient portion of the reflection nebula complex in this part of the sky.