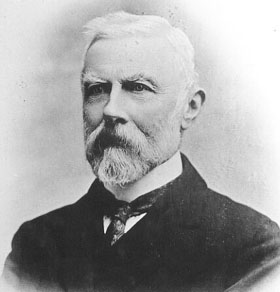 John Dreyer was a Danish-born Irish astronomer (also known as Johan Ludvig Emil) who compiled the New General Catalogue (NGC) and its supplements, the Index Catalogues (IC). In 1874, he was appointed as an assistant of the Third Earl of Rosse at Birr Castle, and worked with what was at that time the world's largest telescope. He began observing and surveying deep sky objects (star clusters, nebulae, and galaxies), and in 1878 published a supplement of about 1,000 new "nebulae" to John Herschel's General Catalogue. Also in 1878, he went to Dublin and worked as assistant at Dunsink Observatory from 1878 to 1882 before he became director of Armagh Observatory (1882–1916) in Northern Ireland. Armagh Observatory was badly funded in those days and mainly had old, smaller instruments. So Dreyer concentrated on compiling new catalogs from older observations, including the NGC and its supplements. Among his other works was a biography of his childhood hero, Tycho Brahe.