The dolphin has come full circle in evolutionary history and has returned to the sea. Typically mammalian features are not very easily recognizable because of the dolphin's streamlined, fish-like body. After birth of the young which feed from teats close to the genital opening, female dolphins separate themselves from the school with one other female. Dolphins have well-developed social lives and considered highly intelligent. 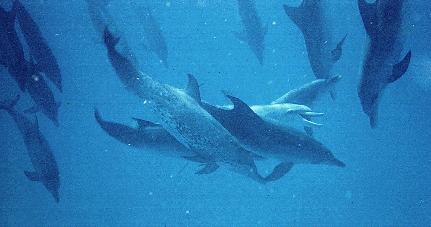 The controversial neurophysiologist John C. Lilly argued1 that dolphins represent a non-human form of intelligence on this planet with which we might learn to communicate. If he is right then the fact that intelligence has evolved at least twice on Earth increases the chances that it might be common elsewhere. Additionally, our efforts to understand the complex language of dolphins may help prepare us for the problems we may face when attempting to communicate with an extraterrestrial race.

Lilly's claims for dolphin intelligence are supported by the remarkable learning skills and playful, inventive behavior of these animals. In recent years, researchers have observed bottlenose dolphins and beluga whales in captivity creating underwater rings and helices of air for their own amusement. A particularly strong "ring culture" has developed at Sea Life Park Hawaii, where the tradition is passed down from experienced adults to novices. Researchers Ken Marten, Karim Shariff, Suchi Psarakos, and Don J. White describe2 how dolphins also draw humans into their play:

[O]ne day during a period of intense ring making, Tinkerbell repeatedly blew a ring and then came to the lab window where one of us (Psarakos) was videotaping, as if to include her in the activity. Once, we blew soap bubbles inside the lab in front of the dolphins' window, and within a few minutes one of the dolphins joined in by blowing simple, rising doughnut rings near the lab window. The real surprise came when the dolphin swam away ... and made several fluke vortex rings – so different from what we each blew at the window.

Lacking hands with opposable fingers and thumb, or alternative manipulative appendages, dolphins are physically incapable of developing tools. Nevertheless, their behavior speaks of a creative, self-aware mind at work. They may serve as an indication that high intelligence is not always, or even often, accompanied by a significant level of technology (see intelligence, nature). Yet to what extent the absence of delphian technology represents a fundamental limit to how closely we can hope to comprehend the thoughts of this fellow cerebral species is unclear.3 (ch. 24) See also cetaceans.