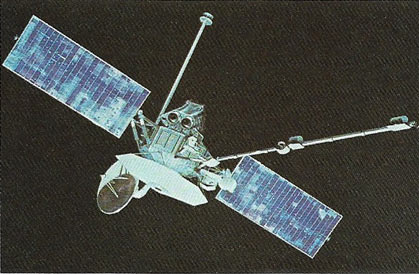 Mariner was an early series of NASA interplanetary probes developed and operated by JPL (Jet Propulsion Laboratory). The Mariners became the first probes to return significant data on the surface and atmospheric conditions of Venus, Mars, and Mercury.

The first American attempt to send a probe to Venus. Guidance instructions from the ground stopped reaching the rocket due to a problem with its antenna, so the onboard computer took control. However, a bug in the guidance software caused the rocket to veer off course and it was destroyed by the range safety officer. The destruct command was sent 6 sec before separation, after which the launch vehicle could not have been destroyed. The radio transponder continued to transmit signals for 64 sec after the destruct command had been sent.

Backup for Mariner 1 and the first probe successfully to fly by another planet. Data it sent back confirmed that Venus has a slow retrograde (backward) spin, a very high surface temperature, and a thick atmosphere made up mostly of carbon dioxide. Mariner 2 passed Venus at a closest distance of 34,773 km on 14 December. The last transmission from the probe was received on 3 January 1963; it remains in solar orbit. For more, see the encyclopedia page on Mariner 2.

Sister probe to Mariner 3 and the first spacecraft to photograph Mars at close range; it came within 9,846 km of the martian surface on 15 July 1965. The 21 pictures it sent back showed a cratered terrain and an atmosphere much thinner than previously thought. Based on its findings, scientists concluded that Mars was probably a dead world, both geologically and biologically. Later missions, however, showed that the ancient region imaged by Mariner 4 was not typical of the planet as a whole. In 1967 Mariner 4 returned to the vicinity of Earth and engineers were able to use the ageing craft for a series of operational and telemetry tests to improve their knowledge of techniques needed for future interplanetary missions.

Venus flyby probe that came within of 3,990 km of the planet's surface. Originally a backup for Mariner 4, Mariner 5 was refurbished and sent to Venus instead. Its main task was to find out more about Venus's atmosphere by using radio waves and measuring the brightness of the atmosphere in ultraviolet light. It also collected data on radiation and magnetic fields in interplanetary space.

Mars probe that returned 75 images of the martian surface and flew by at a distance of 3,431 km. Disaster almost struck while it was still on the ground. Ten days before the scheduled launch, a faulty switch opened the main valves on the Atlas booster, releasing the pressure which supported the Atlas structure and causing the rocket to crumple. Two ground crewman who started pressurizing pumps and saved the 12-story structure from further collapse at risk to themselves were awarded Exceptional Bravery Medals from NASA. Mariner 6 was moved to another Atlas-Centaur and launched on schedule. The pictures it sent back of Mars were less Moon-like than those of Mariner 4 and the south polar cap was identified as being composed mostly of carbon dioxide.

Mars flyby probe which was reprogrammed in the light of the Mariner 6 findings. It was instructed to go further south than originally planned, take more near-encounter pictures, and collect more scientific data on the lighted side of Mars. In all, it returned 126 images and approached to within 3,430 km of the surface.

The first spacecraft to orbit another planet. The Mariner Mars '71 mission was supposed to involve two spacecraft: Mariner 8, which was to map 70% of the martian surface, and Mariner 9 which was to study changes in the martian atmosphere and on the ground. The failure of Mariner 8 forced Mariner 9 to combine the mission objectives. On 14 November 1971, the probe arrived at Mars and, after a rocket burn lasting 15 min 23 sec, entered orbit. Imaging was delayed by a dust storm which quickly grew into one of the largest ever seen on the planet. Of the surface, nothing could be seen except the lofty summits of Olympus Mons and the three Tharsis volcanoes. The storm abated through November and December and normal mapping operations began. The spacecraft gathered data on the atmospheric composition, density, pressure, and temperature and the surface composition, temperature, gravity, and topography. A total of 7,329 images were returned covering the entire planet. After depleting its supply of attitude control gas, the spacecraft was turned off on 27 October 1972, and left in an orbit which should not decay for at least 50 years. Mariner 9 provided the firsts global map of the surface of Mars, including the first detailed views of the martian volcanoes, Valles Marineris, and the polar caps, and of the satellites Phobos and Deimos. For more, see the encyclopedia page on Mariner 9.

The first probe to send back close-up pictures of Mercury's surface. En route, it received a gravity-assist from Venus and returned images of the Venusian atmosphere in ultraviolet, revealing a previously unseen level of detail in the upper cloud deck. On 29 March 1974, it flew past Mercury, at a distance of 704 km, sending back pictures of an intensely cratered, Moon-like surface and detecting a trace atmosphere of mostly helium. After the first flyby, Mariner 10 entered a solar orbit and went on to two further encounters with the innermost planet. On 21 September 1974, the second flyby, at an altitude of 47,000 km, afforded another opportunity to photograph the sunlit side of the planet and the south polar region. The third and final Mercury encounter on 16 March 1975, at an altitude of 327 km, yielded 300 photographs and magnetic field measurements. Mariner 10 was turned off on 24 March 1975, when its supply of attitude-control gas was depleted.