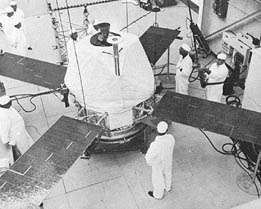 Mariner 9 was a Mars orbiter probe, launched May 30, 1971, which went into orbit around Mars on Nov 13, 1971 and subsequently returned 7,329 pictures of the planet's surface before contact was lost on Oct 27, 1972. These images showed a world very different to that seen in the lower resolution images of the earlier Mariners. In particular, they revealed a diversity of terrain including channels and other features that indicated there had once been liquid water on Mars. This discovery revitalized interest in the possibility of extant or past martian life (see life on Mars) at a time when preparations were being made to send Viking in search of it.1

A vast dust storm began on Sep 22, 1971, while Mariner 9 was en route to Mars. This continued for a month after the spacecraft entered orbit and meant that mission staff, in a ground-breaking exercise, had to re-program the probe to wait until the storm had abated. The Soviet probe, Mars 2, arrived shortly before Mariner 9 and crashed due to the dust storm. Mars 3 touched down on the surface, but malfunctioned after 20 sec.