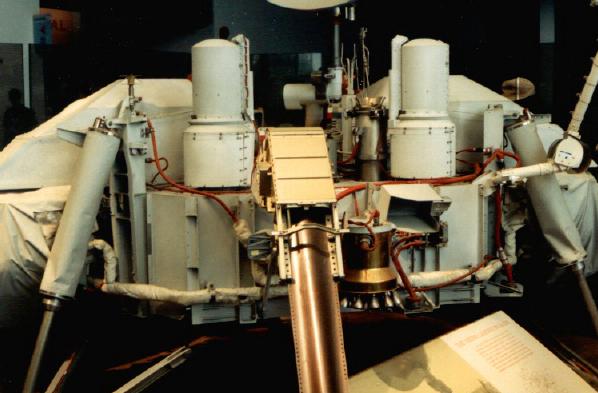 Viking 1 and Viking 2 were twin spacecraft launched toward Mars on August 20 and September 8, 1975. Each consisted of an orbiter and a lander (with a combined mass, less propellant, of 600 kg), the latter carrying a sophisticated package of instruments, including several experiments designed to search for traces of life in the Martian soil (see life on Mars).

After arrival in orbit around the planet on June 19 and August 7, 1976 (Viking 1 having departed second but arrived first), a detailed reconnaissance was carried out to identify suitable and safe landing sites, during which the United States celebrated its bicentennial. On July 20, the Viking 1 lander touched down in the western part of Chryse Planitia, at latitude 22.4°N and longitude 47.5°W, followed, on September 3, by its sister craft 7,420 km to the northeast, in Utopia Planitia, at latitude 48°N and longitude 226°W.


Viking and the search for life

The Viking project, managed by the NASA Langley Research Center, was the first space mission to have as one of its primary goals the attempt to find extraterrestrial life. Although initiated in 1968, its origins actually extended back to the late 1950s when the newly-formed NASA set up a Bioscience Advisory Committee and then, in 1960, an Office of Life Sciences. The latter authorized the Jet Propulsion Laboratory to study the type of spacecraft needed to land on Mars and conduct a search for life. To NASA Ames Research Center fell the task of evaluating early proposals for life detection equipment. In the end, diverse opinions about the possible nature of Martian life led to the Space Science Board selecting and recommending a package of three experiments which would test for life using different philosophies and methodologies (see Viking gas exchange (GEX) experiment; Viking labeled release (LR) experiment; Viking pyrolytic release (PR) experiment) and thereby cast an investigative net widely. A fourth experiment, the Viking gas chromatograph-mass spectrometer (GCMS), was included to look for the presence of organic (not necessarily biogenic) material.

Preliminary tests on the first soil sample, collected by Viking 1 on July 28, 1976, immediately brought surprises. Gas was given off following the introduction of nutrient in the LR experiment, before the reaction tapered off – exactly the outcome expected if microorganisms had been present in the soil. The PR experiment also gave a positive result, compatible with metabolic activity in the sample. In the case of the GEX experiment, both carbon dioxide and oxygen were evolved, the latter being a reaction never before seen in tests on either terrestrial or lunar soils. The speed and course of the reaction, however, suggested that it might be due to an oxidizing chemical rather than a biological process. On the face of it, then, two of the three biology experiments gave indications of life. But the results of the first GCMS tests were curiously negative. No organics were detected in the Martian soil to the level of a few parts in a billion, prompting Viking project scientist, Gerald A. Soffen, to comment "All the signs suggest that life exists on Mars, but we can't find any bodies!"

Ten weeks later, following more tests at both landing sites, researchers were still undecided about what their results meant. Soffen summed up the general feeling:1

The tests revealed a surprisingly chemically active surface – very like oxidizing. All experiments yielded results, but these are subject to wide interpretation. No conclusions were reached concerning the existence of life on Mars.

At the end of eight and a half months of investigations on the Martian surface, including 26 biology experiments, the jury was still out – and remains so to this day. The failure of the GCMS to find any organics whatsoever was particularly surprising because even soil and rock samples brought back from the moon by the Apollo astronauts had some organic molecules, deposited over the ages by carbonaceous meteorites. Further confounding the issue is that isotopic evidence for organic molecules indigenous to Mars has been identified in three Martian meteorites found on Earth.

The GCMS was used as the final court of appeal. Instead of looking at the possibility that the GCMS instrument itself might have somehow been flawed or in error, the Viking team began to propose theories as to why no organic molecules existed on Mars. This was done despite doubts that had been raised during early testing over the GCMS's ability to detect organic matter even in soils on Earth.

An "official" position emerged that some highly oxidizing chemical, probably hydrogen peroxide (H2O2), was responsible for the activity registered by the biological experiments. A cogent theory based on this idea was put forward by Vance Oyama. Hydrogen peroxide could have been formed naturally as a result of ultraviolet light splitting water molecules in the Martian atmosphere. The hydroxide (OH) radicals thus created would recombine to form, for example, H2O2). The peroxide would eventually drift down from the atmosphere and be adsorbed onto soil grains. Over the eons, the process would literally bleach away all the organic molecules near the surface, even those from meteorites, and thereby eliminate any chance for life to exist near the surface.

Even if the oxidant hypothesis proves true, the issue of surface or near-surface life on Mars would not necessarily be closed. According to one 1989 NASA Ames Research Center study, by Rocco L. Mancinelli, even if oxidants such as hydrogen peroxide were present at a level of 25–250 parts per million, they would not prevent the survival and growth of some terrestrial microorganisms, let alone any that may have evolved and adapted in the Mars environment. That inference seems even more likely today because our knowledge of the extreme conditions under which microbes can survive has grown immensely since the days of the Viking mission and the Mancinelli study.

A minority of researchers, most notably Gilbert Levin, continue to argue that the Viking data are better explained in biological terms. Intense investigation of the Red Planet over the next decade seems likely to settle this issue once and for all.2, 3, 4, 5. For more, see Viking's search for life on Mars