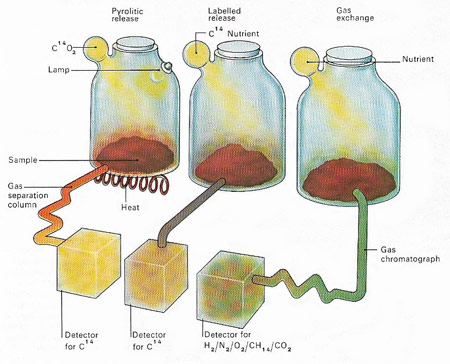 The Viking gas exchange (GEX) experiment was one of the the three main biological experiments carried aboard each Viking lander (Fig 1); GEX was developed by Vance Oyama at NASA Ames Research Center and designed to test for life under two different conditions.

In the first mode, it was assumed that organisms that had been dormant for a very long time under dry conditions on Mars would be revived and stimulated back into metabolic activity by the addition of moisture alone. The effect of any subsequent Martian life processes would be to alter the composition of the gases (such as carbon dioxide, nitrogen, and methane) above the sample in a way that would be measurable by the onboard gas chromatograph. During a 10-day incubation period, the gas composition was determined five times. In the second, wet nutrient (or "chicken soup") mode, a rich organic broth (containing 19 amino acids, vitamins, a number of other organic compounds, and a few inorganic salts) was "fed" to the sample as a further encouragement to induce metabolism. Again, a change in the gas mixture might indicate that some kind of organism was stirring into life.