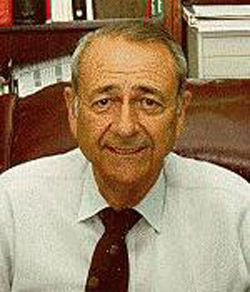 Gilbert Levin is a one-time sanitation engineer in California who developed a technique to detect bacterial contaminants in water and went on to play a significant role in the Viking project as designer and team leader of the Viking labeled release (LR) experiment. In his detection method, the sample to be tested was mixed with a nutrient containing traces of radioactive carbon-14. Any bacteria present in the sample would feed on the nutrient and, as a waste product of their metabolism, give off radioactive carbon dioxide which could be detected with a radiation counter.

Commercial interest in the technique proved disappointing, but then, at a cocktail party in 1959, Levin met T. Keith Glennan, NASA's first administrator. A discussion ensued about approaches to life-detection by space probes which led, in 1961, to Levin being awarded a contract to develop an instrument to search for life on Mars. Known as "Gulliver", and eventually, more formally, as the "labeled release experiment", this was to provide the most intriguing data of the three experiments making up Viking's integrated biology package. Yet, while the scientific consensus, in the wake of Viking, was that the remarkable activity found in the martian soil was of a purely chemical nature, Levin stood firm in his conviction that the data suggested a biological interpretation. So strong were the disagreements between the different camps involved in the biology experiments on Viking, that the dispute became acrimonious and was the subject of two consecutive issues of the New Yorker in 1979. To this day, Levin vociferously maintains that Viking found life on Mars.


Levin's hypothesis about the Viking results

According to Levin, the activity detected in the Viking soil samples by all three biology experiments is best understood in terms of the metabolism of living organisms. This puts him squarely at odds with the majority view that oxidizing chemicals on the surface can provide an adequate explanation, for example, as expressed by Vance Oyama.

Levin favored a biological interpretation of the Viking results from the outset. But over the years since the mission ended, he has become increasingly outspoken on the issue and, together with his Viking team member, Patricia Straat, has made some remarkable and controversial claims. One is that the Viking gas chromatograph-mass spectrometer (GCMS), which failed to find any sign of organic matter in the martian soil, was much less sensitive than officially stated and would have been incapable of detecting biological matter in samples containing a low density of microorganisms. Another of Levin's claims is that greenish patches, seen on some of the Viking photographs, changed over time, suggesting that they were some kind of plant life, and furthermore, that spectral analysis of the patches compared favorably with the spectra of lichen-bearing rocks on Earth.

Opponents of Levin, point out that as an engineer who set out to design an instrument to prove that there was life on Mars, he has an intrinsically biased viewpoint.