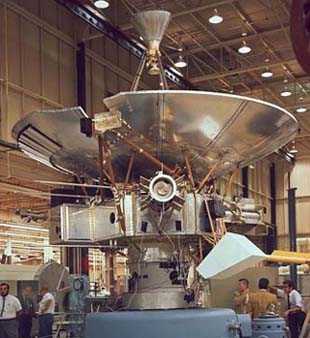 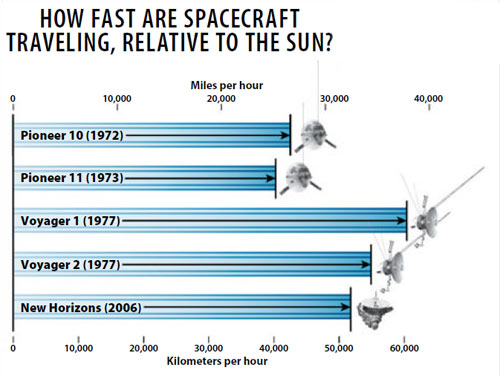 Pioneer 10 was the first spacecraft to cross the asteroid belt and to fly past Jupiter. Pioneer 10 is now on an exit trajectory from the Solar System, along with its sister probe, Pioneer 11, and Voyager 1 and Voyager 2. Of this interstellar quartet, only Pioneer 10 is heading in the opposite direction to the Sun's motion through the Galaxy. Until recently, it was tracked in an effort to learn more about the interaction between the heliosphere and the local interstellar medium.

Fifteen experiments were carried by Pioneer 10 to study the interplanetary and planetary magnetic fields; solar wind parameters; cosmic rays; transition region of the heliosphere; neutral hydrogen abundance; distribution, size, mass, flux, and velocity of dust particles; Jovian aurorae; Jovian radio waves; atmosphere of Jupiter and some of its satellites, particularly Io; and to photograph Jupiter and its satellites.

The instruments used to support these experiments were:

Further scientific information was obtained from the tracking and occultation data.

The spacecraft body was mounted behind a 2.74-m-diameter parabolic dish antenna that was 46 cm deep. The spacecraft structure was a 36-cm-deep flat equipment compartment, the top and bottom being regular hexagons. Its sides were 71 cm long. One side joined a smaller compartment that carried the scientific experiments.

Power for the spacecraft was obtained by four SNAP-19 radioisotope thermonuclear generators (RTG), which were held about 3 m from the center of the spacecraft by two three-rod trusses 120° apart. A third boom extended 6.6 m from the experiment compartment to hold the magnetometer away from the spacecraft. The four RTGs generated about 155 W at launch and decayed to approximately 140 W by the time the spacecraft reached Jupiter, 21 mo after launch.

There were three reference sensors: a star sensor for Canopus which failed shortly after Jupiter encounter and two sun sensors. Attitude position could be calculated from the reference directions to the earth and the sun, with the known direction to Canopus as a backup.

Three pairs of rocket thrusters provided spin-rate control and changed the velocity of the spacecraft, the spin period near the end of the mission being 14.1 s. These thrusters could be pulsed or fired steadily by command. The spacecraft was temperature-controlled between -23°C and +38°C.

A plaque was mounted on the spacecraft body with drawings depicting a man, a woman, and the location of the sun and the earth in our galaxy.

Communications were maintained via (1) the omnidirectional and medium-gain antennas which operated together while connected to one receiver and (2) the high-gain antenna which was connected to another receiver. These receivers could be interchanged by command to provide some redundancy. Two radio transmitters, coupled to two traveling-wave tube amplifiers, produced 8 W at 2292 megahertz (MHz) each. Uplink was accomplished at 2110 MHz, while data transmission downlink was at 2292 MHz. The data were received by NASA's Deep Space Network (DSN) at bit rates up to 2048 bits per second (bps)en route to Jupiter and at 16 bps near end of the mission.

Space experiments mostly continued to operate for planetary or interplanetary measurements until failure or until insufficient spacecraft power from the RTG's was available for operation of all instruments, such that some were turned off permanently and others were cycled on and off in accordance with a power sharing plan implemented in Sep 1989. The Asteroid/Meteoroid Detector failed in Dec 1973, followed by the Helium Vector Magnetometer (HVM) in Nov 1975 and the Infrared Radiometer in Jan 1974. The Meteoroid Detector was turned off in Oct 1980 due to inactive sensors at low temperatures. The spacecraft sun sensors became inoperative in May 1986, and the Imaging Photopolarimeter (IPP) instrument was used to obtain roll phase and spin period information until being turned off in Oct 1993 to conserve power. The Trapped Radiation Detector (TRD) and Plasma Analyzer (PA) were respectively turned off in Nov 1993 and Sep 1995 for the same reason. As of Jan 1996 the final power cycling plan included part-time operations of the Charged Particle Instrument (CPI), the Cosmic Ray Telescope (CRT), the Geiger Tube Telescope (GTT), and the Ultraviolet Photometer (UV). By Aug 2000, only the GTT instrument was still returning data.

Various other spacecraft subsystems also either failed or were turned off for power or other reasons, and an account of these may be of interest for engineering design of long duration deep space missions. The primary antenna feed offset bellows failed sometime in 1976 but a redundant unit was available for use thereafter. The Program Storage and Execution (PSE) subsystem was turned off in Sep 1989 for power conservation, after which spacecraft maneuvers were performed by ground command sequences. A receiver problem in mid-1992 prevented uplink to the high gain antenna, after which uplink commands could only be sent with 70-m DSN antennas which also supported the 16 bps downlink. The Backup Line Heater experienced a sticking thermostat operation in Mar 1993 for 30 days but the problem did not reoccur. Undervoltage Protection Logic was turned off in Dec 1993 to prevent loss of critical spacecraft systems in the event of a transient undervoltage condition. Duration and Steering Logic (DSL) was turned off in Feb 1995 to conserve power, after which it was turned on again only for spacecraft maneuvers. RTG power levels are low enough that the spacecraft occasionally relies in part on battery power (accumulated during inactive periods) to run experiments and other systems.

Pioneer 10 is heading for interstellar space at a speed of 12.172 km/s (7.56 mi/s or 27,228 mph). At this rate it would take about 105,000 years to reach what is currently the nearest star to the Sun, Proxima Centauri. However, Pioneer 10's course is taking it generally toward Aldebaran (65 light-years away) in the constellation of Taurus, and a (very!) remote encounter about 2 million yr from now.

The closest that it will come to another star system within the next 100,000 years is 3.27 light-years (1.00 pc) from the red dwarf Ross 248 in about the year 32,608 AD. Even this distant passage will owe more to the relative motions of the stars themselves than the probe's own efforts. It so happens that Ross 248 is approaching the Sun at about 80 km/s (50 mi/s) so that by the year 34,923 AD the gap between the Sun and the red dwarf will have narrowed from its present value of 10.3 light-years (3.2 pc) to just 2.9 light-years (0.9 pc). Uncertainties in the movements of stars over long periods are one of the main reasons that mission specialists cannot be absolutely sure when and at what range future stellar flybys of escaping probes will take place.1

The power source on Pioneer 10 finally degraded to the point where the signal to Earth dropped below the threshold for detection in its latest contact attempt on Feb 7, 2003. No more attempts at contact are planned at this time. The previous three contacts had very faint signals with no telemetry received. Pioneer's last, very weak signal was received on Jan 23, 2003. The last time a Pioneer 10 contact returned telemetry data was on Apr 27, 2002.

Unexplained deviations in the trajectories of Pioneer 10 and 11 have lead to a number of theories to explain the so-called Pioneer anomaly.